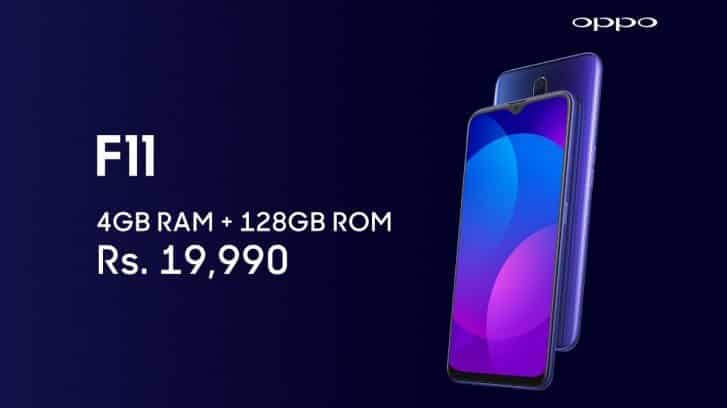 Oppo F11 comes with some lower-end specs, when comparing to the F11 Pro. But the both devices has nearly identical specs and features.

For instance, the Oppo F11 Pro sports a pop-up selfie camera, while the F11 features a water-drop notch display. And there are other slight changes in features.

Another major differences between the Oppo F11 and Oppo F11 Pro Android Smartphone is the prices of the phone in India. And they are India-exclusive.

Arrives with the trendy 19.5:9 aspect ratio, with minimal bezels and borders. Although, there is still a chin at the bottom of the Smartphone.

The phone comes with a notch at the up front, which houses a single front facing 16-megapixel camera, for selfie shots.

At the back sits a dual rear camera, which consists of primary 48-megapixels with f/1.79 aperture and another secondary 5-megapixels depth-sensor with f/2.4 aperture.

Oppo confirmed that cameras uses pixel binning, and there is the Ultra Night Mode similarly to Google’s Night Sight or Huawei’s Night Mode.

The both cameras are enhanced with AI, offering 23 types of recognized scenes and color enhancement, which Oppo calls Color Mapping. The regular connectivity are still intact.

The mobile handset is also powered by a MediaTek Helio P70 chipset, running at a moderate Octa-core processor. And available in either 4GB or 6GB of RAM.

For the memory storage, the mobile phone also offers 64GB or 128GB of internal storage, which is not expandable via micro SD card slot.

And it is fueled by a 4,000mAh battery capacity, with Oppo’s VOOC 3.0 fast charging. And the company promises 80minutes full charge via the traditional micro USB port.

For pricing and availability, the company is offering the Oppo F11 4GB RAM + 128GB internal storage for INR 19,990 and will be available through Amazon India, starting March 15.