Oppo is expanding its Smartphone lineup with their new “Waterdrop notch display” feature. Which really brings in a much smaller notch display than the wide and trapezoid size notch display. Say hello to Oppo A7X!

The newly launched Smartphone, Oppo A7X mobile device comes with a large screen display, a water-like notched display but its unlike the Oppo R17 Pro smartphone with 8GB RAM and in-display fingerprint sensor. Instead, it packs a rear-mounted fingerprint sensor and 4GB RAM. 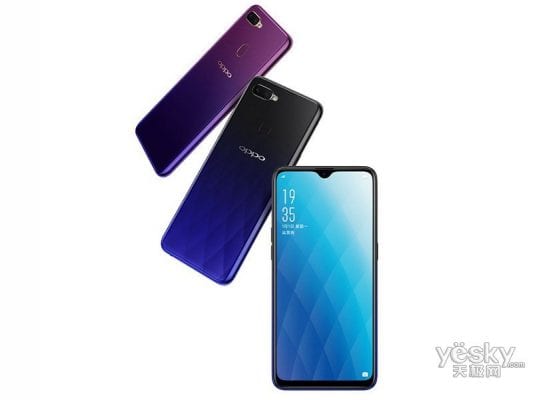 The latest Smartphone to be launched in the company’s A-series is the Oppo A5 and it still comes with a notch display. But on the A7X, there is a little differences, a little touch. It sports a 6.3-inch display, 19.5:9 aspect ratio boasting of 90.8% screen-to-body ratio.

Unlike the Oppo A5, the A7X features a water-drop display notch at the up front. Which is much slimmer, thinner and narrow than the iPhone-X’s notch display. It is available in available in Star Purple and Ice Flame Blue colour options.

The Oppo A7X features a rear-dual horizontally mounted camera setup, – primary 16-megapixel + secondary 2-megapixel f/1.85 aperture and a 8-megapixels selfie snapper. It is enhanced with AI assistance features like AI scene, detection, beauty. There is a glass back design with a diamond cut pattern and runs on Color OS 5.2 based on Android 8.1 Oreo.

It is powered by a 2.0GHz MediaTek Helio P60 octa-core processor, coupled with 4GB of RAM. With a graphic processor of Mali-G72 MP3 GPU. The Internal storage is at 128GB, with an expandable micro SD card for more storage.