Oppo A7 has been launched finally, the phone arrives with spectacular specifications and it is brings a bunch of amusing features to the table. Chinese phone makers, Oppo mobile, are highly making top end Smartphones, taking their device a step further.

The newly announced Oppo A7 Smartphone has been on rumors for the past few days, but right now, it is surprisingly awesome to find out that the deal is now live. It comes with other normal and regular specs, but the presence of HyperBoost, makes it much more attractive. 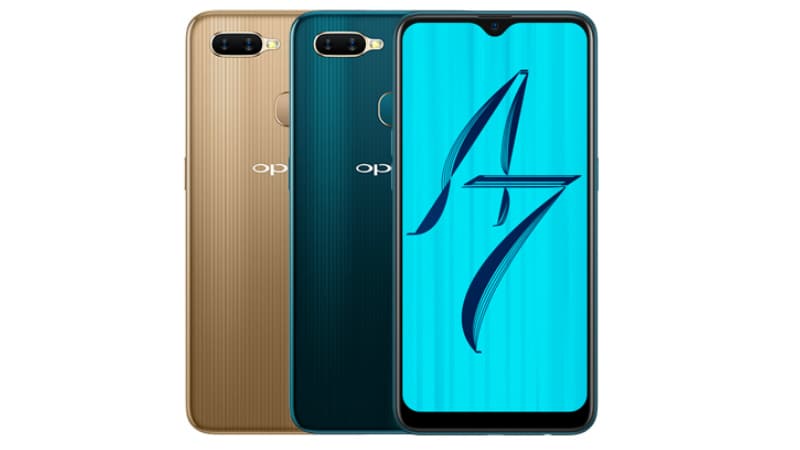 The Smartphone comes in two different variants, which includes the RAM, storage and colors but they all have a specific and standard design, which makes it hard to differentiate. The phone sports a 6.2-inch diagonal HD+ IPS LCD panel with 720×1520 pixels, and a 19:9 aspect ratio.

Oppo A7 also boasts of 88.3 screen-to-body ratio, and you will find the trending water-drop notch, which is also known as teardrop notch display, which holds the selfie camera at the top front. A7 Smartphones also packs other respectable features.

However, at the back of the device, you will find the fingerprint sensor scanner, and dual camera setup. And the mobile phone is available in Fresh Powder, Lake Light Green, and Amber Gold color options, only in china while in Nepal, you have the Glaring Gold and Glaze Blue. This colors enlighten the distinction among other mobile phones.

Oppo A7 Smartphone was officially launched in China and Nepal and it is available for purchase right now. It is among the top phones to come with dual camera setup at the back, and a single front selfie shooter, which is surprisingly amazing and amusing at the same time.

However, at the back, there is a massive 16-megapixel selfie sensor and it arrives with AI-enhancements, which allows users to easily take impressive and crystal clear photos. And it supports a handful of network and connectivity, and they includes: dual 4G VoLTE, Wi-Fi, Bluetooth v4.2, GPS/ A-GPS, GLONASS, Micro-USB with OTG support, and a 3.5mm headphone jack.

The Oppo A7 Android Smartphone comes in two variants, just like aforementioned. However, the Chinese version of the Oppo A7 will have 4GB / 64GB memory storage, while the Nepal variant will hold a singular variants of 32GB internal storage.

Thankfully, the both variants will be expandable up to 256GB with a microSD. Above all, the most impressive feature is the HyperBoost, which allows smooth gaming interface performance. With this feature, the Oppo A7 becomes the company’s first mid-range Smartphone to arrive with this feature.

The Oppo RX17 Pro is the company’s first phone to arrive with the HyperBoost feature, that was introduced at a special event back in mid-October, which is a straight competitor with the Huawei’s GPU Turbo technology. Meanwhile, the Oppo A7 is the second and the first mid-range Smartphone to spot it.

Oppo explained that the HyperBoost adapts CPU and GPU usage to provide up to 31% smoother experience in selected mobile games, including Arena of Valor, PUBG, and the latest FIFA. However, we are looking forward to more Smartphones with HyperBoost support.

The Oppo A7 runs on ColorOS 5.2 on top of Android 8.1 Oreo out-of-the-box. And it is powered by an Octa-core Qualcomm Snapdragon 450 SoC, which is of course an outdated mid-range processor but still function appropriately. The phone is fueled by a 4230mAh battery capacity.

Price of Oppo A7

Oppo A7 is an Android powered Smartphone with spectacular features. The phone is slowly targeting the gamer’s world, and the most especially feature here, is the amazing HyperBoost feature. However, the phone is priced in China at CNY1,599 / $230.

But it is a little bit expensive in Nepal, (reason remains unknown), it goes for NPR35,790 / $310. The phone is currently on pre-order on any of the country. But the availability hasn’t been verified, but will go on sale before the end of the year!