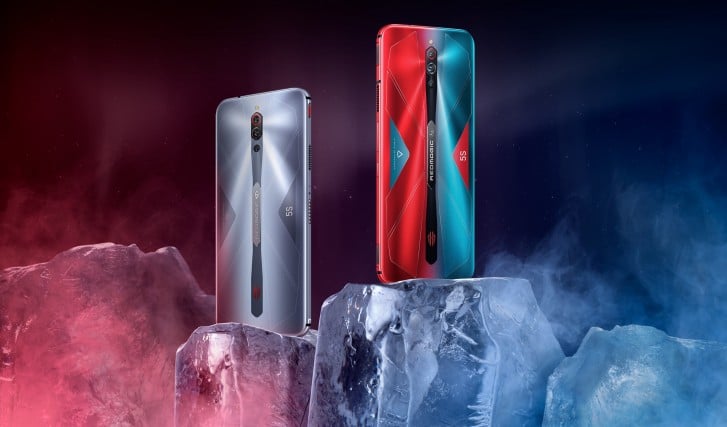 The Red Magic 5S is the successor to the Red Magic 5G that was released back in March, but Nubia added advanced specs and features to the new mobile phone. To be precise, there is an overhauled cooling system with a silver-plated vapor chamber.

Since it is not a camera-focus Smartphone, Nubia plastered a triple camera lens at the back, 64MP Sony IMX686 main camera, 8MP wide-angle lens, and a 2MP Bokeh lens. While the front slim bezels sport a 12-megapixels front camera.

It measures 9.75mm dimension, weighs 220g, support in-display fingerprint scanner, and it is available in Sonic Silver and Pulse colors options. It runs on Android 10 OS out of the box, with the company’s Redmagic OS on top.

The silver-plated cooling pad, it is a multi-dimensional cooling system ICE 4.0 (air-cooling + liquid-cooling) as one of the biggest improved features, and it delivers much better results than the traditional copper heat pipes that result in lower throttling in most smartphones.

Like its predecessor, the Red Magic 5S retains the 15,000 RPM spinning fan to cool it down while charging at its peak 55W speeds. These also include the following, transparent air duct design along with aerospace-grade nano thermal material, 10 intelligent temperature sensors, and an L-shaped liquid cooling tube.

Inside the phone is Qualcomm’s latest chipset, the Snapdragon 865 7nm Mobile Platform running at a speed of 2.84GHz Octa-Core with Adreno 650 GPU. The phone comes with a 3.5mm audio jack.

The phone comes with the following variant, there is the 8GB /12GB / 16GB RAM with 128GB / 256GB internal memory with the Ice Dock cooling accessory. Similar to other gaming smartphones, RGB lighting is also present.

To keep the phone light on, the phone sports a 4500mAh battery capacity with 55W fast charging with an air-cooled turbo fast charge. With this, the phone can charge up to 68% in 20 minutes, and 100% in 39 minutes.

For availability, the pre-sale has already started in China, and official sales to start on August 1. Meanwhile, the company will launch the global variant of the phone in September. The Nubia Red Magic 5S is definitely a gaming phone.