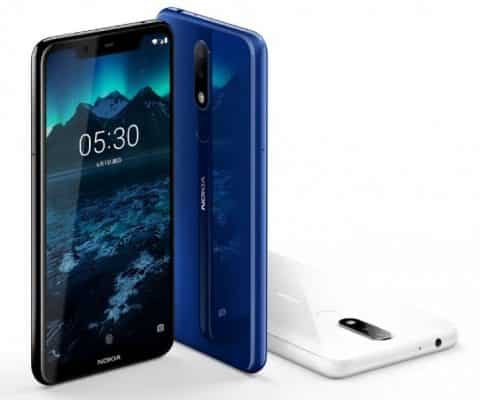 As expected, HMD Global unveils the latest Nokia X5 with a notch display and fine cutting edge design, that provides an outstanding premium look on the back and front of the device. It worthy to note that HMD Global promised customers that all the Nokia phones will be updated to Android P.

Recall that Nokia introduced the Nokia X5-00/01 with Symbian OS and then it was considered Smartphone but today, here is the lovely feel of sophisticated Android powered Smartphone.

Although, we had expected Nokia X, but instead, HMD Global decided to launch the Nokia X6. Anyways, it is cleaver and knowledgeable to say Nokia X-series has been going wide with overwhelming features and specs.

We are now aware that Nokia X5 is finally official with Helio P60, pictures a notch display, holding the selfie camera, receiver and the light sensor. Due to the presence of the notch display, it provides a slimmer bezels at the top and bottom with a slight chin, that holds the company name logo.

While on the display, the phone comes with a tall 5.86 inches Full screen display, and glass body. Of course, this isn’t new, we saw this for the first time on iPhone X. But the X5 is a mid-range device, which boasts of 2.D curved glass on the edges and 84% screen-to-body ratio.

Although, there was high expectations from Nokia X6 but when comparing the video quality with X5, you might have to rethink twice, as the the quality is slightly lower than the X6, playing or streaming videos and gaming won’t be quite as good.

The Nokia X5 comes in black, blue, and white, under the dual camera at the back, there is the fingerprint sensor scanner, which provides a stable and preferred way of securing your device.

Anyways, the X5 camera has not been fully tested until the official launch but the Nokia X5 Smartphone packs a dual camera setup at the back of the device. Which consists of 13-megapixels as it main camera and 5-megapixels as the secondary.

The 13-megapixels is enhanced with f/2.0 while the 5-megapixels. This will allow the phone to take crystal clear images, the dual lenses provides the in-depth capturing, beautifies it and enhances the photo to be outstanding from others.

On the front of the device, it comes with 8-megapixels with f/2.2 aperture, it supports 80-degree wide viewing angle and AI portraits and beauty mode. Unfortunately, there is no support for Facial recognition.

The Nokia X5 phone will be able to handle almost anything you throw at it. The phone arrives with MediaTek Helio P60 chip-set processor running at 2.0Ghz octa-core, it provides a strong performance to streaming videos and playing intensive games.

It comes in variants, 3GB of RAM with 32GB internal storage and 4GB of RAM with 64GB of internal storage, but none equate with X6 with 6GB of RAM. With the 3GB / 4GB RAM, the X5 builds up the phone performances, allowing smooth switching of apps, and the internal memory space can be expandable up to 256GB, with the help of micro sd card.

The phone is powered by a 3060mAh battery capacity, this will definitely keep the phone powered on for at least, few hours to a day with heavy usage. The phone runs on Android 8.1 Oreo, it is the latest OS but the company promises that, the X5 can upgrade to Android P, when it is officially available.

How much is the Nokia X5?

The Nokia X5 smartphone is only available in China at this time and it starts at CNY 999. It will be available globally later as Nokia 5.1 Plus, just like the Nokia X6 and Nokia 6.1 Plus.

Right now, you can buy the phone in China starting July 19th. Pre-orders begin today on the company’s official website. The price and cost of the Nokia X5 starts from ¥999, which is $148.70 and around N53,300 in Nigeria currency.

Of course, the Nokia X5 Android powered Smartphone is a sleek device with notch display, tall screen sizes, thinner and slimmer borders at the top and bottom, offering a high screen-to-body ratio, with high performing processor coupled with RAM.

The X5 is meant to handle most task thrown at it, understand commands and execute every programs according. However, the mid-range device is equipped with outstanding specs and features, offers a sophisticated design, definitely, the X5 is an affordable phone!