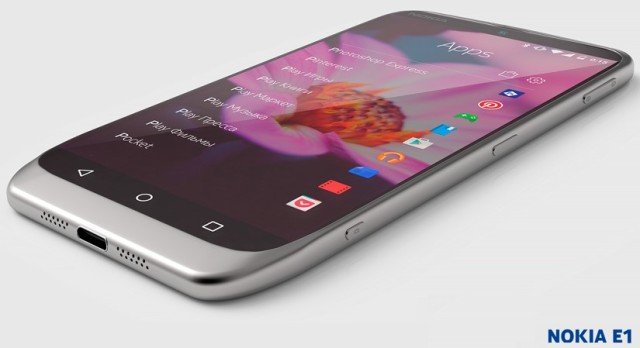 Nokia company are really coming back to the Android Smartphone world. Rumor’s has it that the newly bought company -who are best known for producing world class smartphone are ready to launch new Android Smartphone.  It is also rumor that Nokia will launch there 4th mid range smartphone New Nokia E1 with lots of interesting and incredible features. Nokia will launch these amazing smartphones together in the Q2 of next year 2016.

The design of the new upcoming Nokia E1 is expected and rumored to be stunning. The appearances and the operating system are yet to talk about. Although, we are still not too sure about the Nokia C1 Android Smartphone. The Nokia Flagship Smartphones will be launching by the end of this year. Although, Nokia Swan and Nokia Power Ranger are among the top Nokia Launches in 2016!

But the question of Nokia has not yet been answered -will Nokia E1 bring success to the Nokia group; the answer is not yet out but like the Blackberry Hamburg, Nokia might rise or fall back. But as the cheapest and most affordable Smartphone producers, we urge them to still stay with us.

However, many people expect it will come with great design and affordable price. On the internet, there are different rumors about Nokia E1 release date, but according to some reliable sources, it will be launch in the Q2.

What We Should Expect from the Nokia E1 Android Smartphone

The Nokia E1 has a promising features, it will come with a 2GB RAM and 32GB external storage. Hence, making the processor and the operating techniques to be faster. No more hanging, no more stopping and it is expected to run the latest Android 6.0 marshmallow. The Nokia E1 battery is expected to be Superb.

If Nokia Power Ranger can be a high-end smartphone to mark the Nokia’s comeback, Nokia E1 can be a mid-ranger helping Nokia get closer to their 2016 goals. The price of E1 made the Smartphone to look more affordable and budgeted than other Nokia Upcoming Android Smartphone.

The Nokia is arriving with a strong 20MP Pureview and 5MP camera on the back for selfies. And especially, it has a 4.95-inch Full HD IPS display which gives you the best feeling when watching HD videos. And it will be arriving with Nano Sim (4G).

The New Nokia E1 is Powered by a 2.3GHz Intel 64-bit Atom processor, PowerVR G6430 graphics, and a 2GB of RAM, New Nokia E1 will come with a Huge tank of storage almost 32GB of internal storage, and with a really nice battery back up of 2700 mAh battery you can listen to music and watch videos for a longer time.

Price of Nokia E1 in Nigeria

The Phone has been announced to arrived as a good affordable Smartphone in 2016. Maybe the Nokia E1 price is cost as around an only USD 200 – 250. And it is expected to go for Rs. 29,990 in india. Meanwhile, in the Nigeria currency, it is around #60k to #80k. Not Affordable in Nigeria because of the poor economic.

We are not yet sure, is the first Nokia Android going to be Nokia E1 or the Monster Nokia C1 Android Smartphone, let’s keep watching, meanwhile, you can say your thoughts using the  below comment box and share this post to your friends using the below share buttons.