HMD Global holds the Nokia announcements today, in London, and few minutes ago, they officially unveiled the Nokia 7.1 Android Smartphone and it arrives with a 19:9 PureDisplay, dual rear cameras, and powered by a mid-range Snapdragon 636 SoC processor.

The Nokia 7.1 mobile device packs a smaller notch display at the top, and the bottom chin is occupied by the company’s logo name. The latest Nokia phone is also among Google Android ONE program, which ensures that the phone will receive re-occurring updates for the next 2-year-long period and 3 years of monthly security patches. 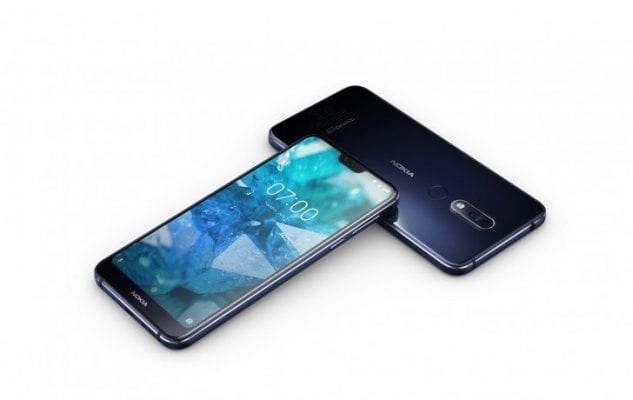 The Nokia 7.1 looks spectacular in its mirror-finish glass and anodized aluminum+metal frame design, after-all, it is the second-generation iteration of the Nokia 7 Smartphone. Hence, the company ensures a more fine-looking panel design for the successor.

HMD Global has launched a lot Nokia phones with the .1 series, as the the 2018 family. The Nokia 7.1 is part of that success story, coming with 5.84-inch notched 19:9 Full-HD+ 1080pixels with PureDisplay panel. Which was first seen on Nokia 7 Smartphone.

And it supports HDR 10, which will bring in a more sharper, colorful and brighter display and Corning Gorilla Glass 3 protection. Recall that the Nokia 7 was a China-exclusive at first, but the Nokia 7.1 is definitely something enlightening. Notably, the new Nokia mobile phone is light-weighted and it feels a little bit moderate when holding.

Moderate screen display fits both smaller and bigger hands but unfortunately, the LCD screen display is somewhat frustrating. However, the phone is available Gloss Steel and Gloss Midnight Steel color options. There is fingerprint sensor scanner, under the dual rear camera.

The dual rear camera seems to be the selling points for the Nokia 7.1, from all aspect, the display and design brings in a premium feeling but unfortunately, it failed to live up to the standard of complete success. But HMD Global did a little piece of fine-craftiness handiwork there.

Nokia 7.1 comes with a dual camera at the back, which consists of a 12-megapixel f/1.8 aperture primary sensor, with support for Auto-focus, while the other 5-megapixel f/2.4 aperture secondary sensor supports fixed focus. The dual cameras are also equipped with two-phase detection and Zeiss optics.

While at the front, the Nokia 7.1 boasts of 8-megapixel fixed focus sensor with f/2.0 aperture and 84-degree field-of-view. It is a mid-range device but expect fine shots from the device. Nokia 7.1 support HMD Global’s “bothie” mode to take a photo using both the front and back camera.

It also supports the bokeh effects, which easily blurs out the background of the photo. There is the Pro Camera UI mode that lets you adjust individual settings like brightness and white balance. The connectivity includes 4G LTE, Wi-Fi 802.11ac, Bluetooth v5.0, GPS/ A-GPS, GLONASS, NFC, USB Type-C, and a 3.5mm headphone jack. 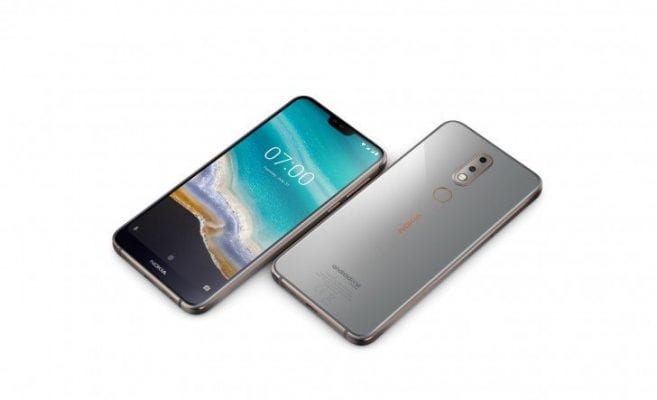 The handset is powered by a mid-range chipset: a Qualcomm Snapdragon 636 SoC running at 1.8GHz octa-core processor. It arrives in two different ranges, 3GB / 4GB of RAM for switching of apps and 32GB / 64GB of inbuilt storage. Thankfully, it is expandable up to 400GB via micro SD card slot.

As already mentioned, the phone is part of Google Android One program, hence, it runs on Android Oreo, based on Android One but unlike LG V4O ThinQ, the company said the phone will receive the latest Android 9 Pie software upgrade within the next month.

Under the hood, the phone is fueled by a 3060mAh non-removable battery and supports for 18W fast charging, via the USB-C connector on the bottom of the device and it delivers 50 percent charge in 30 minutes. On a single charge, the phone might lasts a full day.

Sarvikas also touted the Nokia 7.1’s real-time SDR to HDR conversion using a 16-bit engine, letting users experience “HDR quality entertainment, even when the content is not.” The smartphone is built out of 6000 series aluminum CNC machined frame and a die cast metal centre.