Among the three newly launched device from HMD Global, the Nokia 5.1 (2018) is the impressive one here with premium specs and like the Nokia 8 Sirocco, it runs on Android One. It is another ultra-cheap Android One smartphone.

The Nokia 5.1 features a fingerprint sensor scanner, which is mounted at the back of the device. Rumors spread out that HMD Global will unveil the Nokia 5 (2018) but it turns out that to be Nokia 5.1, revamped version of the original Nokia 5.

The new version of the Nokia 5 is upgraded with a lot of attractive features and specs. Although, they both have a striking resemblance with each other. Notably, you would notice that the fingerprint sensor has been shifted from the Nokia 5 front physical home button to the traditional side, the back. 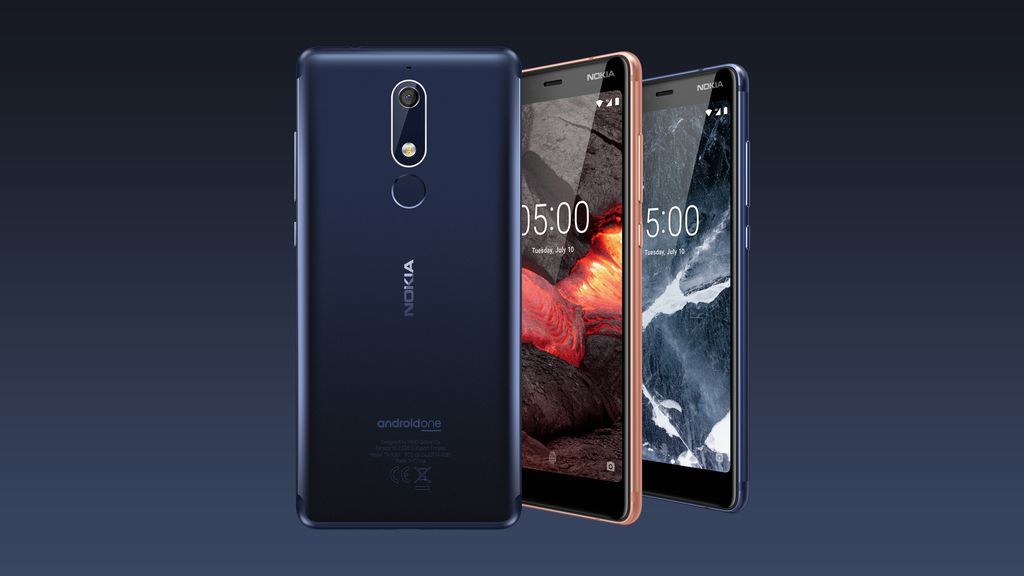 The newly announced device offers a stylish and mouth-watering design on the back and front display. Features a bright and shiny aluminum design with a curved glass divine finishing and it looks so real and premium, oh yes, the upgrade from the Nokia 5 is conspicuous with the 5.5-inch Full HD display in an 18:9 aspect ratio.

While on the camera aspect, the phone features a 16-megapixel (MP) rear camera and an 8MP front camera. Decisively, the phone will take appropriate photos and selfies, even under direct sunlight.

There’s also NFC, a a headphone jack and front-facing stereo speakers. The Nokia 5.1 joins HMD Global’s other Android One range of “pure” Android, including the Nokia 8 Sirocco, Nokia 7 plus and Nokia 6.1.

Note that: Android One phones are guaranteed to receive three years of monthly security patches and two years of OS updates.

Anyways, also be aware that HMD has moved the antennas to the top and bottom of the phone to improve need for giant ugly antenna lines.

The Nokia 5 Smartphone is currently price within the range of N50k – N55k per unit and we are expecting a slight change like N5k – N10k addition. Lets wait till comes into Nigeria.