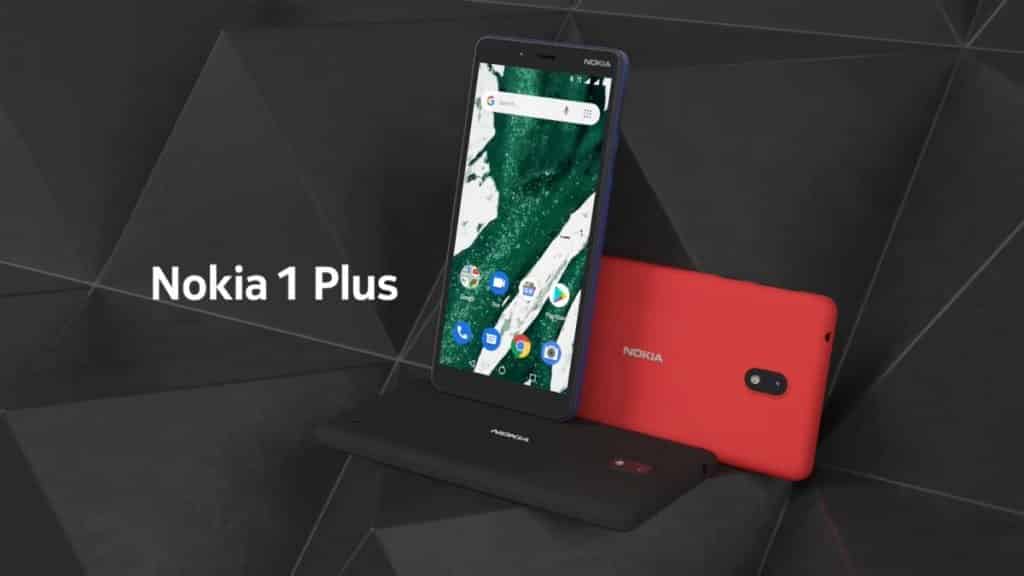 The HMD Global was entirely present at the Mobile World Congress, MWC 2019 and they also launched the Nokia 1 Plus Android Smartphone with Android Pie (Go Edition), 18:9 aspect ratio, and 1GB of RAM.

The Nokia 1 Plus Android Smartphone is a larger version of the Nokia 1, which was exactly launched a year ago. And it is just part of Android One program.

Nokia 1 Plus is just a budgeted mobile phone running on Android Go edition, but arrives with a taller 5.45″ screen and a larger 2,500mAh battery capacity.

During the MWC 2019, HMD Global also unveiled the Nokia 9 PureView Android Smartphone, which eventually took the show. Others includes Nokia 210, 3.2 and 4.2 Android One.

The phone sports a polycarbonate build with interchangeable back panels. Well, there are bunch of mobile phones with such design and it looks moderate.

It is available in different Red, Blue, Black color options, and being a budgeted Smartphone, it failed to come with fingerprint sensor scanner.

For optics, the mobile handset comes with a 8-megapixel sensor at the back along with an LED flash and autofocus support.

While at the front, it packs a 5-megapixel front facing camera sensor, which takes normal selfie shot. Nokia are good, but a 5MP isn’t bad for a budgeted phones.

Nokia 1 Plus is powered by a Quad-core Cortex-A53 MediaTek MT6739WW SoC, coupled with 1GB of RAM. And it runs on Android 9.0 Pie (Go edition) out-of-the-box.

The Android Pie (Go Edition) is Google’s special version of Android, optimized for low specification devices. This allows apps to be smaller by as much as 50% and allow up to 60% data consumption savings.

The Nokia 1 Plus isn’t the first HMD Global Smartphone running on the Google optimized version of Android OS, there is the Nokia 3.1, 3.1 Plus, 6.1 Plus etc

It also comes with PowerVR GE8100 GPU, for intense graphic performance. Allowing you to play stunning games, even under the 1GB RAM.

Arrives with 8GB and 16GB of internal storage, that is expandable via micro SD card, which isn’t different from the older predecessor.

Allowing you to store so many files, which includes documents, videos, images, musics, movies, applications and games files.

The handset packs a 2,500mAh battery capacity, used to power the mobile phone. The Nokia 1 Plus is priced at $99, and will go on sale in the global markets starting March.