Will top smartphones company stop copying the Apple iPhone X notch? This is another interesting piece of Croatian mobile phones producers that are well known in Croatia that launches various cell phones and sell it at an affordable prices.

Well, they were also in attendance during the Mobile World Congress 2018 and likewise introduces other mobile phones known as N10, N7, and N1 but right now the NOA N10, is what caught our eyes.

The NOA N10 was unveiled just a day before the ASUS ZenFone 5/5z at the MWC 2018. It arrives with 6.18-inch AUO IPS 1080p panel, with an 18:9 aspect ratio, design wise, it features an aluminum and glass sandwich with a ceramic back panel. 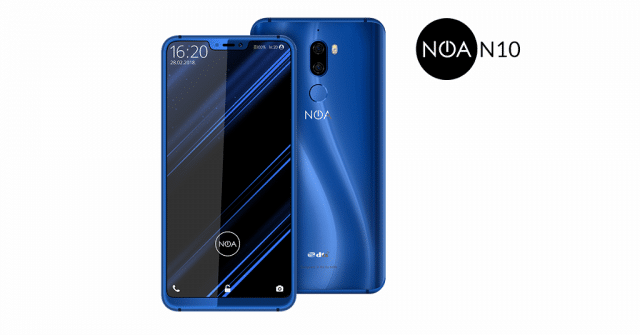 Other specs includes, 4GB of RAM and 64GB of build-in storage, expandable via microSD and it is powered by a Mediatek Helio P23 (MT 6763) 2.3GHz octa-core processor. While the camera pixels is also amazing, features a three 16MP shooters, which supports face unlock and it includes two rear Sony IMX 499 sensors that enable portrait mode plus.

This is a dual-SIM, dual-standby 4G LTE phone running Android 8.0, with a 3600mAh battery. And it ditched the headphone jack, but the handset comes with a USB Type-C connector and also a back-mounted fingerprint sensor that might be priced at €300 (US $369) in one of the NOA’s eastern European markets.