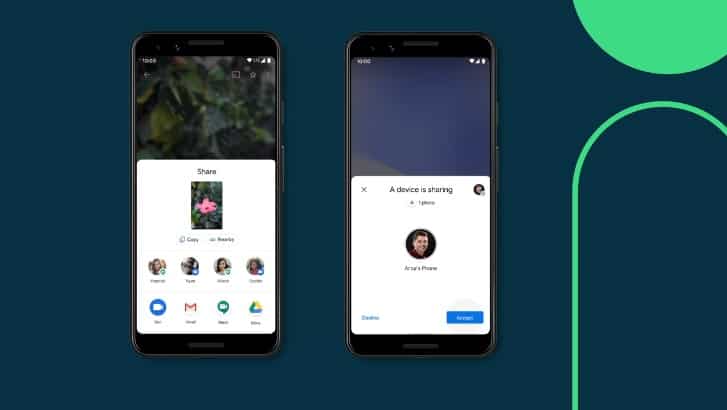 With Nearby Share from Google, you are now able to send almost anything to your contacts close by, which is between Android and Android, but quickly and more securely.

Over the year of mobile phones, we’ve got different platforms of sharing files, starting from Infrared, Bluetooth, and WiFi methods. Now we’ve got the Nearby Share that uses Bluetooth to create a peer-to-peer Wi-Fi network between the devices.

Nearby Share is an easy and simple way to send files between two Android devices, and it works similarly to Apple’s AirDrop, which allows it to only share with people in the contacts list.

Sharing files such as photos, links, files, and more with others nearby on Android has never been easy like Apple users have AirDrop, which allows iPhone users to seamlessly send almost anything to other nearby Apple devices with just a few taps.

You might have understood the basic idea behind the Nearby Share for Android, allowing you to send photos, videos, links, and contacts and more from one Android device to another.

But in order to make it happen, it’ll use peer-to-peer Wi-Fi when you’re completely offline, and other sharing protocols include Bluetooth, Hotspot, WebRTC, and more.

As already aforementioned, the feature is similar to Apple’s AirDrop, and it is rolling out in the Play Services beta right now. The feature will be arriving for all users with Android 6.0 and above.

This question is easily answerable from your own end, follow the below steps to confirm if your phone does have the support for Nearby Share feature right now:

That is it, your phone does support this newly announced feature. Practically, you’re good to go. Anyways, you must also understand that the above setting might be different due to phone manufacturers’ settings tweaks.

To be clear, Google mentioned that this feature only works with phones that support 2015’s Android 6.0 or higher. If you don’t have, Android 6.0+ phones will have it over the next few weeks. There is a 90% chance of getting the feature if you have a phone that was released from 2015 or newer.

Also, note that Nearby Share is available for selected Google Pixel and Samsung Galaxy phones, but Google says that because the feature is a part of Google Play Services, you do not need to wait for an over-the-air update from your manufacturer or carrier to get it.

Before now, Android had a non-popular sharing feature called “Android Beam” and it was introduced the same year (2011) with Apple AirDrop. However, Google killed that feature in 2019, it lets you bump the back of two phones with near-field communication sensors together to send photos, files, and more.

How to find Nearby Sharing?

However, you can keep checking whether your phone has it, and manually make the Google Play Services to update, thereby, enforcing the Nearby Share. To do that,

But the fastest way to find Nearby Share is to:

Another method of finding it is as if you want to text or email the file to a contact, which means you will have to go to the share sheet, tap Nearby Share and turn on the feature. Later on, users will need to choose their default device name and visibility settings.

Accepting that none worked, you can also go to settings, then head to connected devices, then to Connection preferences and Nearby Share. Based on your phone, this particular setting might look different.

Let’s say, you have successfully find the Nearby Share feature, you can now learn how to share between Android phones using the feature. Before we begin, understand that Nearby Share isn’t as easy as Apple’s AirDrop feature.

In order to make it more simple, the person you’re sharing with will need to be close, and they may need to tap on a pop-up notification to become visible to you. Most times, the sharing process time depends on the file you are sending.

There are three options when it comes to Device Visibility:

From Google blog post, the company mentioned that “Nearby Share will work with Chromebooks so you can swiftly share files between an Android phone and a Chromebook, and vice versa” and we are looking out in a couple of months.