This is really getting hot, just as of October Ending reaching November early month, rumors have it that Mtn was definitely fined by NCC to pay the some of $5.2 billion fine due to failed registration of sims.

NCC whose reputation began showing up even after they have lost a complete database of their system, hence, making it looks as if hackers got in the way.

Anyway, Yesterday, Mtn CEO Sifiso Dabengwa took the page about the rumors but still said that they are still in full speech. 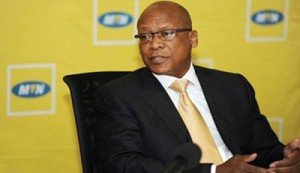 There were reports that MTN had agreed to pay the over one trillion Naira fine slapped on them by the Nigerian Communications Commission (NCC) ) for violating its directive on SIM deactivation.

In a statement issued yesterday by South Africa’s MTN Group, they said they are still in talks with Nigerian authority about the fine “MTN continues to engage authorities in Nigeria on this matter”

Meanwhile, there are reports that FG has agreed to extend MTN’s operating license, despite no agreement on the fine. (MTN Group CEO Sifiso Dabengwa pictured above)