This is the Motorola One Hyper with a 32-megapixels pop-up camera mechanism, 6.5-inch FHD+ Total Vision display, Android 10, 64-megapixels rear camera, runs on Android 10 OS and priced at $400 price tag.

One Hyper is the company’s latest One series smartphones and it is Motorola’s first mobile phone to arrive with a pop-up camera design.

The Motorola One line phones aren’t ultra-flagship devices, but they tend to balance between the verge of mid-range and high-end smartphones.

In the past few months, the company has announced a few One lineup series, which includes the Motorola One Zoom (four camera lens), Motorola One Action (GoPro-style action camera) and now the One Hyper with a pop-up camera. 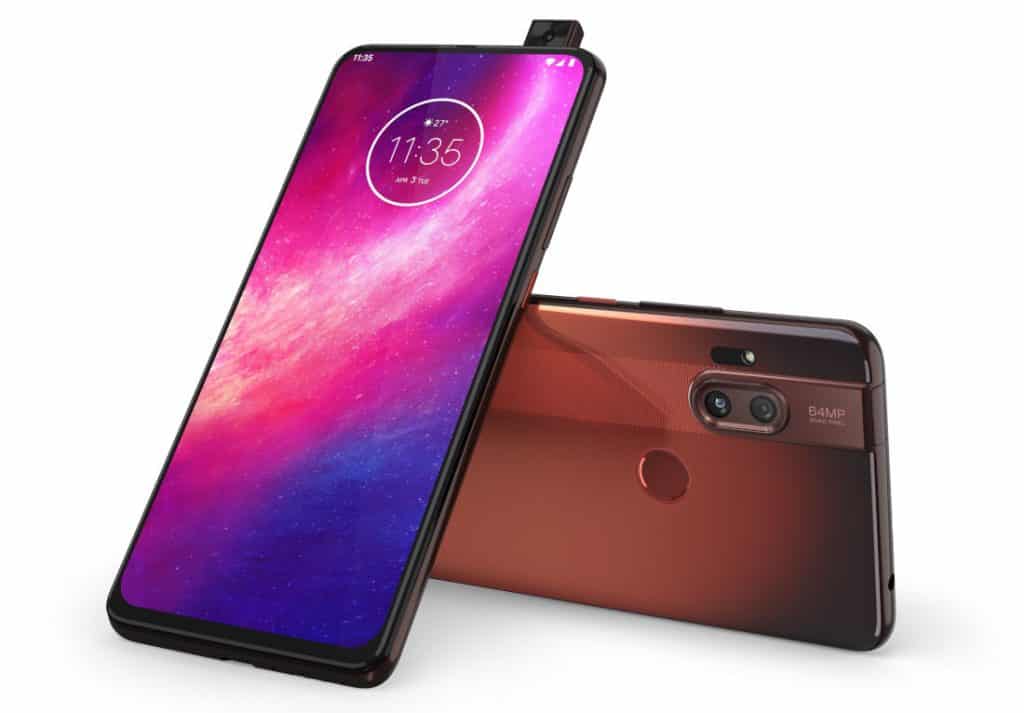 The One Hyper comes in a Deepsea Blue, Dark Amber, and Fresh Orchid color options and weighs 210 grams and it is 8.9mm slim.

At the back-panel sits the dual-camera setup and a rear-mounted fingerprint scanner with a notification light around it that subtly illuminates in different ways to keep you updated without disturbing you.

Arrives with a notch-less 6.5-inch Full HD+ 19:9 aspect ratio LCD screen, which the company is calling Total Vision with a 90% screen-to-body ratio. But it packs a slim bezel at the bottom.

The pop-up camera mechanism features a 32-megapixels sensor (0.8µm pixels, 1.6µm with pixel binning). This is actually the highest resolution selfie cam on a Moto phone.

Support Night Vision mode and Quad Pixel technology that brings in 4x more light sensitivity. Like other pop-up camera phones, the One Hyper is also protected by a drop protection mechanism.

The drop protection feature makes the phone’s pop-up mechanism to automatically retract during a sudden drop or when the phone is flipped upside down.

And there is an 8-megapixel 118-degree ultra-wide lens. The Quad Bayer filters on both the rear and the selfie cameras enable Motorola’s Night Vision feature for low-light shots.

It is powered by 2GHz Octa-Core Snapdragon 675 Mobile Platform with Adreno 612 GPU, 4GB RAM and 128GB internal storage, expandable memory up to 1TB with microSD.

Runs on Android 10 out of the box, fueled by a 4000mAh battery capacity with support for 45W Hyper-charge USB Power Delivery 3.0 fast charging that promises 12 hours of battery life with 10 min of charge.

Actually, this is the first device with “Hyper Charging” and it is the company’s fastest charging speed. Motorola noted that some might get the 15W TurboPower charger in the box.

This means that the exclusive 45W Hyper-charge USB Power Delivery charger will be sold separately. The OnePlus 7 PRO is priced around $549, since,  they are both similar to each other.

But the Motorola One Hyper costs $399.99 and you can purchase it right away in the US as an unlocked mobile phone from Motorola.com.