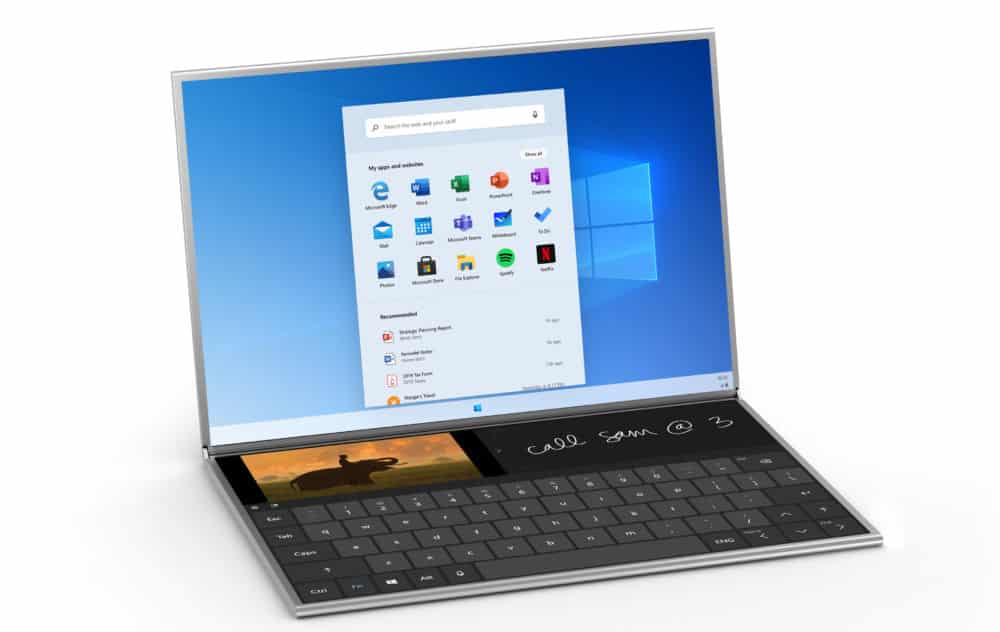 Microsoft announces a dual-screen device known as Surface Neo but it’ll be available next year. The Microsoft Surface Neo was officially announced with a dual 9-inch displays that unfold into a large 13-inch screen, and it runs on the new Windows 10X OS out of the box.

Anyways, the new Surface Neo dual-screen device arrives with a two 9-inch screens connected by a 360-degree full-friction hinge and it opens into a full-size 13-inch display with thinnest LCD.

Microsoft is still yet to bring more details, but the new Surface Neo might just be another prototype after the 2008 Courier concept. Anyways, it runs on Windows 10X, which is a new OS for dual-screen devices.

Microsoft said that “It’s built for productivity and multitasking like a true PC would be – running full productivity apps, with a removable keyboard and compatibility with Surface Pen and Bluetooth mouse,”.

Productivity comes into play with the both screen, allowing you to multitask easily, but they don’t advises you to spread a single window across both. It definitely look like a large notebook when folded up.

Taking a look at the new device, you will noticed that each of the screen display is nine inches diagonally, uses Gorilla Glass, thinnest LCD, 5.6mm thick and weighs 655 grams.

It also support the new thin Surface Pen, and there is the magnetically attached Keyboard to the back. As already aforementioned, the new Surface Neo won’t be available till next year holiday, which might be 2020 November or December.

Wondering about the Windows 10X, it is the company’s new OS for dual screen and it looks much like the regular Windows 10 but there is a new kind of Start Menu and task bar.

Few tech company will be introducing their own set of Dual-Screen PCs running Windows 10X starting in the fall of 2020 powered by Intel, they includes ASUS, Dell, HP and Lenovo.

Because it might be the future of dual-screen, the Windows 10X allows you to launch one app on one screen and a second on the other. And to make it more fun, the apps automatically reflow when you rotate the device.

It support all types of apps, as Zlateff said. But Microsoft went ahead to confirm that the Windows 10X is designed for new dual-screen PCs and not as an OS upgrade if you already own a PC. And they also said that it will be working with app developer ecosystem for custom apps.