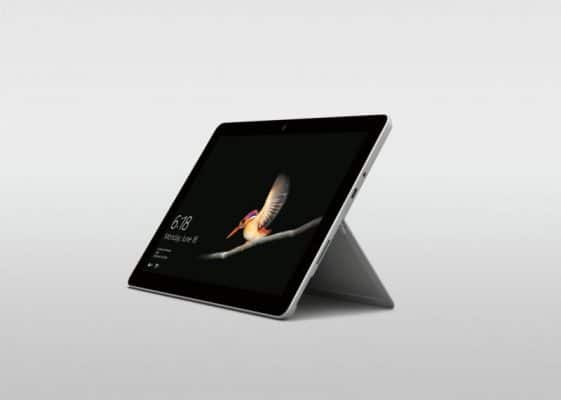 Microsoft introduces Surface GO Tablet, it is an affordable tablet with magnificent display, processor and it comes in two variants, which offer different pricing and will be available for pre-order.

The newly announced Microsoft device, Surface GO tablet packs some resemblance with other top tablet, including Apple iPads. The Microsoft Surface line has been incredibly smart, but they are more of high-end specs and pricing.

So, today, Microsoft is re-taking a dive into the budgeted tablet market, with their new Surface GO! The new tablet offer more unprecedented features and specs, but a smaller variants to the Microsoft Surface Pro!

The Microsoft Surface GO has a comparable large bezels surrounding the screen, but the essence of the bezels being there is calculated, it is might to hold the tablet keyboard attachment. But offer bigger screen display of 10-inch screen 3:2 1800 x 1200pX.

Unfortunately, when comparing the display design with such bezels to the latest version of Apple iPad, the Surface GO looks more obsolete and archaic. They are losing one important features, which is meant to compete with Apple iPads.

The new tablet is equipped with various features and specs, it is the first to have both USB-C and Microsoft’s Surface Connector, others includes a MicroSD card slot, a headphone socket and there is the Microsoft’s Windows Hello facial recognition camera for unlocking the device.

It runs in Windows 10 S mode out of the box but can be switched to regular Windows 10 at any time. Also like the Surface Pro, the Surface Go has an optional keyboard cover (available in four colors), and works with the optional Surface Pen.

The Intel’s Pentium Gold 4415Y processor, is more similar to Chromebooks, that uses a dual-core seventh-generation model, it will help deliver unparalleled and unprecedented performance and battery life.

Coming down to the battery life of the device, the company says the Go has up to nine hours of battery life. The Windows 10 with S mode, allows users to access the apps available in the Microsoft Store and users will be able to switch to the full version of Windows 10 for free anytime.

You can also insert your device into a Surface Dock which will allow you to output the display to multiple monitors at a time. This particular Surface device does not come with a keyboard, so you’ll have to purchase one separately.

Microsoft is launching the Wi-Fi versions of the Go initially, but will also bring the LTE equipped model later this year. There’s support for the Surface Pen stylus, with its full 4,096 levels of pressure sensitivity and very low latency.

The removable / detachable keyboard costs $99 or $129, but it definitely depends on the color, the Pen is priced at $99. And the Surface mobile mouse is priced at $34.99. The mouse is available in silver, red, and blue color options.

It is available for pre-order starting July 10th and will ship in August. The Microsoft Surface GO device is aiming at users with iPad, that uses a Bluetooth keyboard instead of a laptop. So, if you are one, then it is time for you to re-consider!