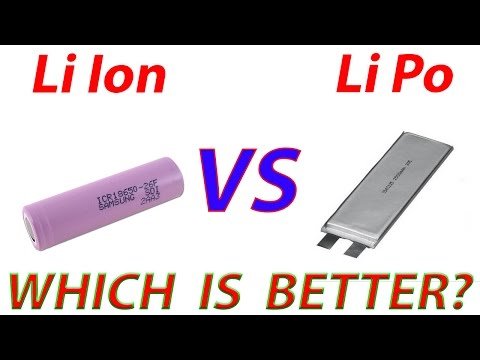 You usually see Android Smartphones or Mobile Feature phones with Battery specification as either 4000mAh Li-ion battery or 4000mAH Li-Poly battery, so today, we are going to discuss about Lithium Ion Batteries and Lithium Polymer Batteries!

Lithium-ion batteries, often abbreviated as Li-ion, are extremely common these days, meanwhile Lithium Polymer batteries, also called LiPo or Li-poly batteries. But what are the differences, similarities and which of them is Better?

Nickel-metal-hydride and lithium-ion emerged In the early 1990s, fighting nose-to-nose to gain customer’s acceptance. Today, lithium-ion is the fastest growing and most promising battery chemistry. 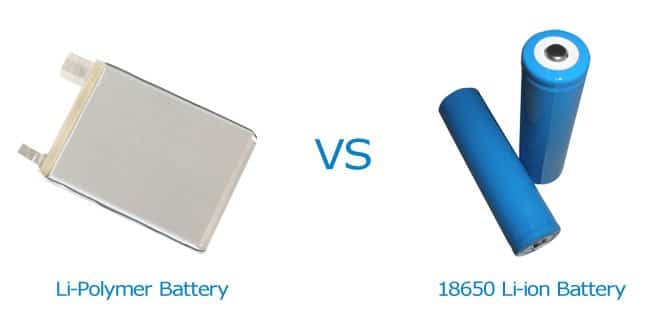 Although slightly lower in energy density than lithium metal, lithium-ion is safe, provided certain precautions are met when charging and discharging. In 1991, the Sony Corporation commercialized the first lithium-ion battery. Other manufacturers followed suit.

The high cell voltage of 3.6 volts allows battery pack designs with only one cell. Most of today’s mobile phones run on a single cell.

– Lithium-ion is a low maintenance battery, an advantage that most other chemistries cannot claim.
– Lithium-ion cells cause little harm when disposed.
– It is fragile and requires a protection circuit to maintain safe operation.
– Lithium-ion packs are known to have served for five years in some applications.
– High energy density – potential for yet higher capacities.
– Does not need prolonged priming when new. One regular charge is all that’s needed.
– Relatively low self-discharge – self-discharge is less than half that of nickel-based batteries.
– Low Maintenance – no periodic discharge is needed; there is no memory.
– Specialty cells can provide very high current to applications such as power tools.

To prevent the electrodes from touching each other directly, a microporous separator is in between which allows only the ions and not the electrode particles to migrate from one side to the other.

The dry polymer design offers simplifications with respect to fabrication, ruggedness, safety and thin-profile geometry. With a cell thickness measuring as little as one millimeter (0.039 inches), equipment designers are left to their own imagination in terms of form, shape and size.

Lithium-ion-polymer finds its market niche in wafer-thin geometries, such as batteries for credit cards and other such applications. 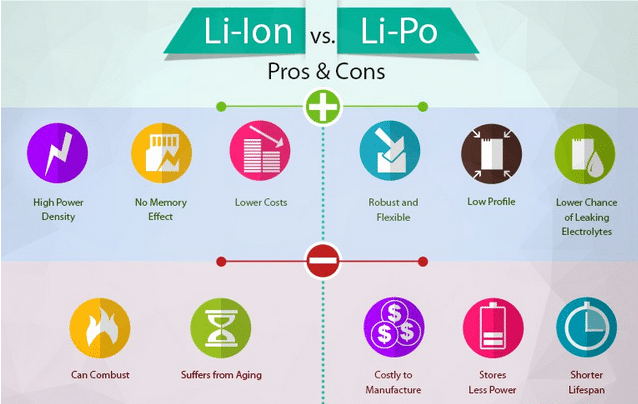 The differences are likely to be quite small for batteries in modern digital devices but strictly it’s better to think of power in Watts not Amps. If someone should ask you, Is a Li-Polymer battery of strength 4200 mAh equal to Li-Ion 4200 mAh battery? Whats going to be your answer?

Different types of battery produce different voltages. A standard AA cell is 1.5volt but a rechargeable AA is often only 1.2 or 1.3v. That’s why some equipment doesn’t work well on rechargeable AA batteries.

Li-Poly and Li-Ion with the same amount of mAh are equal in power storage capacity, meaning 2000mAh for both are the same, and the voltage are the same (3.7 volts per cell). The difference between Li-Poly over Li-Ion is the fact Li-Poly has a slightly higher amount of energy density, and the materials used allowing it to be shaped differently than Li-Poly.

Meanwhile, the most significant difference between lithium-ion and lithium-polymer batteries is the chemical electrolyte between their positive and negative electrodes.

In Li-Po batteries, it isn’t a liquid. Instead, Li-Po technology uses one of three forms: a dry solid, which was largely phased out during the prototype years of lithium polymer batteries; a porous chemical compound; or, a gel-like electrolyte.

The most popular among these is the last one, which is the type of battery you’ll find in newer laptop computers and electric cars. The catch is that plenty of companies are not actually selling you a true Li-Po battery, instead it’s a lithium-ion polymer battery, or a Li-ion in a more flexible casing.

This is one of the most difficult question to answer. But looking at the differences between both of them, they offer the same service just that one is more costlier to make and many others reasons.

Lithium-ion batteries must be charged carefully, or they’ll explode and do other fun things. That’s why all Li-ion batteries have either specific fancy chargers or integrated charge-regulating electronics.

Li-polymer is unique in that a micro porous electrolyte replaces the traditional porous separator. Li-polymer offers slightly higher specific energy and can be made thinner than conventional Li-ion, but the manufacturing cost is higher by 10–30 percent.

If you ever wants to purchase a device and one has a lithium-ion battery and the other has a lithium-polymer, don’t worry: As far as you’re concerned, it’s all the same thing, but in a different package.