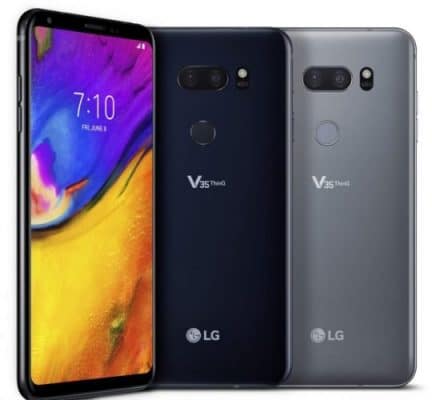 Finally, in a smooth sequel of the company’s V-series, LG just announced the rumored V35 ThinQ Android Smartphone and yes, LG still loves the ‘ThinQ’ stuff. Up till date, we really don’t understand how the ThinQ got to be! But it looks more familiar like its predecessor and the recently launched G7 ThinQ!

If you have been following the ongoing rumors concerning the V35 ThingQ, you would definitely see that the rumors turns out to be true in all aspect, except the launching date, which was rumored during August period.

The newly launched device is specifically amazing, there is the striking resemblance with the company’s other flagship phones and also including the specs aspect.

All about LG V35 ThinQ

The LG V35 ThinQ Smartphone is definitely a choice, when it comes to selecting any of the V-series. Although, there is much higher possibility of multitasking with its higher 6GB RAM, when compared with others.

Like the V30s ThinQ, the successor comes with an OLED display of 6-inch QHD+ with a 18:9 aspect ratio. There is a high screen resolution of 2880 x 1440 pixels with a Corning Gorilla Glass 5 protection. The borders on the phone is quite slimmer, the notch display is actually gone.

The phone still retains the AI and dual camera setup on the back. With the 16-megapixel rear camera f/1.6 aperture + 16-megapixel camera with 107-degree super-wide-angle lens f/1.9 aperture, it takes more expected shot while the front hosts a 8-megapixel front selfie shooter.

It comes with a Portrait Mode for both the front and rear cameras, and Stickers for 2D or 3D overlay effects using face recognition.

It comes with 6GB RAM, higher than the G7 and e is IP68 rating for dust and water resistance and MIL-STD 810G certification. Everything is powered by a 3,300mAh battery with Qualcomm Quick Charge 3.0, Wireless charging.

The V35 ThinQ arrives with 64GB while the V35 Plus ThinQ with 128GB storage. Actually, there is no much of new thing added to the LG V-series, everything was expected. But then, the audio sound is quite impressive, the phone features a 3.5mm audio jack, 32-bit Advanced Hi-Fi Quad DAC, DTS: X 3D Surround Sound.

The phone will be available in Aurora Black and New Platinum Gray colors. Pre-orders starts June 1st for $900 and ships from June 8. But will begin rolling out in different countries such as America, Asia, Middle East and Africa.