LG V40 ThinQ has been officially announced by the company and yes, it arrives with five cameras -two at the front and three at the back. In a bid to compete with the high-end flagship mobile markets, the phone comes with a large 6.4-inch OLED notched display, which can be hidden.

As observed, the LG signatures are written all over the mobile phone, featuring the hi-fi Quad DAC and comes in two different color options – Aurora Black or Moroccan Blue. However, there is the notched display, but lacks the G7’s Super Bright display. Regardless of the super amusing screen, you’ll find the minimal bezels at the bottom. 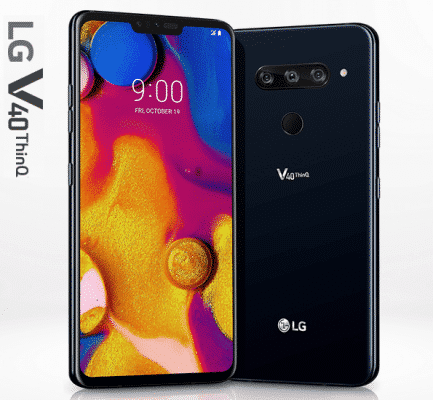 The LG V40 ThinQ with the massive 6.4″-inches notch OLED screen display is definitely awesome and mind blowing, but the phone is meant to compete with the larger OLED smartphones like Galaxy Note 9 and iPhone XS Max. But it is similar to the Note 9. However, the OLED display still brings in a better and excellent in-depth viewing angles of whatever is displaying on the screen.

Thankfully, for those that doesn’t accept the notch display, you can possibly hide it from view. LG V40 ThinQ sports an aluminum frame and glass panels on both the front and back. Which allows it to scratch easily, so basically, if you are opting for the V4 ThinQ, you need to consider the easy, flexible and fragile handling.

The company claims that the V40 ThinQ is much more lighter than the iPhone XS Max and Note 9, probably, an ounce lighter. It features wireless charging, IP68 rating for water and dust resistance. The single speaker is somewhat powerful, a dedicated button on the left side for launching the Google Assistant. Under the triple lens, you will find the fingerprint sensor scanner.

Camera lenses are getting smarter as the year goes by, but the improvement is a little bit smaller but sharper. The upgrade in the camera quality is quite respective and reputable, but it is only competitive with your former phone camera quality.

The LG V40 ThinQ comes with five cameras, two at the front and three at the back. For the very first time, LG is adding the telephoto camera feature, which helps you get closer to your subject. The Huawei P20 Pro provided something like that, but V4O ThinQ is exceptional special.

The three back cameras are equipped with different responsibility, and they work according – a standard camera lens for best shot,  followed by a super wide-angle camera for capturing a wider field of view, then the telephoto camera to get closer to your subject. The shots via the triple camera varies greatly among them. The back cameras includes a 12-megapixels, 16-megapixels, and a 12-megapixels.

The first 12-megapixels f/1.5 aperture, is an optically stabilized lens with a 78-degree field of view. And the 1.4μm pixels are 40 percent larger, especially for capturing photos at low light. While the 16-megapixel f/1.9 aperture lens super wide camera with a 107 degree lets you capture a wider scene.

Lastly, the third 12-megapixels is the new telephoto camera lens with 45 degree, f/2.4 lens for getting a closer look at any object, it points at. It also serves as the portrait mode shots, and it is more smaller and dimmer than others. The camera lenses on the V4O ThinQ is expressive important, compared to any other Smartphone right now. Added to it features includes new lighting effects such as “natural, studio, contour, stage, stage mono.”

But some features has been built right into the camera for easy and smarter shots, a mode called Triple shots easily take a picture from all three cameras in just one press of the shutter, while the long pressing on the zoom buttons shows you what the other cameras can capture.

At the front side with two cameras, the V40 ThinQ features an 8-megapixels camera lens f/1.9 aperture with 80-degree, then there is the wide-angle 5-megapixel f/2.2 camera sensor with a 90-degree. And like the telephoto camera, it supports portrait mode and portrait lighting effects for selfies.

Thankfully, the V40 ThinQ cameras are enabled with the bunch of AI camera features. Fortunately, it didn’t ditch the 3.5mm headphone jack for audio. 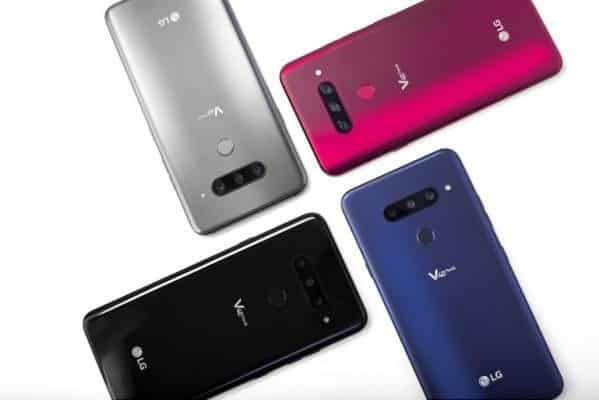 To keep it at flagship level, the handset is powered by Qualcomm Snapdragon 845 chipset, paired with 6GB of RAM for seamless multitasking. It features a 64GB or 128GB of storage with microSD card slot for storage expansion.

The bigger RAM ensures a more easy and smooth handling when it comes to launching multiple app at once, but LG is seriously failing to bring the latest updates to their phones, which is totally unlike the Chinese brands like Oneplus and Xiaomi.

The phone runs on the quaint Android 8.1 Oreo out of the box, this is really old-fashioned compared to the latest Android 9 Pie software. It provides a more reliable battery life than the V30 and G7’s with the large 3300mAh power capacity.

Google lens is also built right into the camera, however, the phone is available to purchase and the starting price of the LG V40 ThinQ is $900 – $1000. Prices ranges from different official stores, purchasing a unit gives you a DJI Osmo Mobile 2 gimbal and a SanDisk 256GB microSD card for free.