The Leagoo KICCAA Power is definitely one of the best Smartphone to feature an exclusive gigantic power house, at the back, it holds a dual camera setup and a fingerprint sensor scanner. 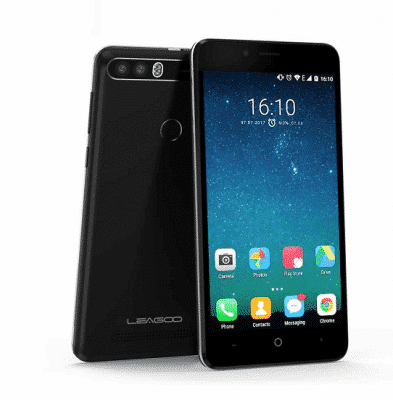 The Leagoo KICCAA Power is a mobile phone, that is quite smaller in screen size, but more comfortable and elegant while holding in your palms. It features a rear-mounted fingerprint sensor scanner, which allows you to easily unlock your Smartphone with your finger tip.

It is available in two different colors options, Elegance Black and Champagne Gold. The phone comes with 5.0″ HD IPS display with 720pixels and 294ppi. The screen display is quite minimal, and the bezels surrounding the display is much bigger, with the 16:9 aspect ratio.

Leagoo KICCAA Power is equipped with 2GB of RAM for seamless multitasking, and 16GB of in-built storage, which is expandable up to 32GB via micro SD card slot. The dual cameras at the back consists of 8-megapixel f/2.2 & 5-megapixel f/2.8 and support Dual Flash.

While the front selfie snapper comes with 5-megapixel f/2.8 aperture but lacks a LED flash. Anyways, the numbers on the cameras f is quite bigger, hence, don’t expect a more professional shot from either of the Smartphone.

It runs on the company’s LEAGOO OS3.0 Lite, based on Android 7.0 and powered by a MediaTek MT6580A chipset running on 1.3GHz Quad core processor. The phone is fueled by a 4000mAh battery capacity and it is priced at N23,000, available in different authorized online and offline stores.

Leagoo S8 Pro is another cheaper alternative to Galaxy S8

Leagoo S8 Smartphone is an inch to a flagship settler (Camera and Battery, no good)