Looking for a cheaper mobile phone running on Android Oreo (Go Edition), then you can easily buckle up for the newly announced itel S13 Android Smartphone with large screen and 1GB of RAM.

The itel S13 mobile phone comes with a fingerprint sensor scanner, which is nicely placed under the dual camera at the back of the device. These two features were very much unavailable in first generation of phone with Android GO! 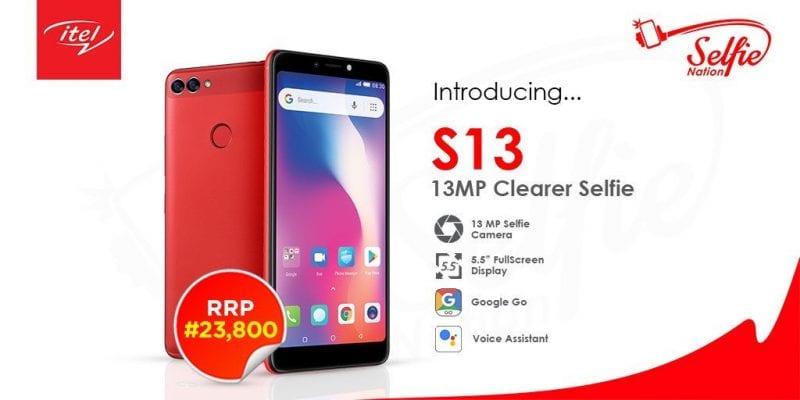 itel S13 is the successor to the S12 Smartphone. And the both phone packs some respectable differences and similarities between the both phones. The S12 packs a dual selfie camera while the S13 comes with dual rear camera.

While on the screen display, there is the large 5.5 inches IPS display with Multi-touch touchscreen and 16M color. It comes with a Liquid-coating display and a screen resolution of 480 x 960 pixels.

The screen display is larger, and being an affordable mobile phone, the S13 is comparatively amazing for its amusing design and the horizontal back dual camera placement. With the spectacular rounded fingerprint scanner.

The back dual camera 5-megapixels + 5-megapixels supports autofocus camera and comes with dual LED flash. It looks like a selfie centric device with the standalone 13-megapixels selfie snapper, which is enhanced with LED flash too.

The phone runs on Android 8.1 Oreo, Go Edition. Which is an optimized version of the standard Android OS, for better performance in low-end Smartphone. Hence, it is pre-installed with apps such as Google Assistant Go, Google Go, YouTube Go, Google Maps Go, and Gmail Go.

Powered by a MediaTek MT6580 running on 1.3GHz Quad-core processor coupled with 1GB of RAM, the itel S13 is meant to deliver smooth multitasking in a premium-affordable style. Everything is fueled by a removable Li-Ion 2400mAh battery capacity.