Slowly and silently, Itel mobile launches their latest Android powered Smartphone, Itel A23 and it comes with Face ID Unlock feature but the Itel A23 lacks a fingerprint sensor scanner at the back, and runs on Android 8.0 Oreo (Go Edition).

The A23 arrives with some amazing specifications and features, but unfortunately, it is not the company’s first Smartphone to run on the optimized Android Oreo Go Edition, they are others, which includes: Itel S33, S13, A22, A22 Pro, A45, A15, P32, and A32F! 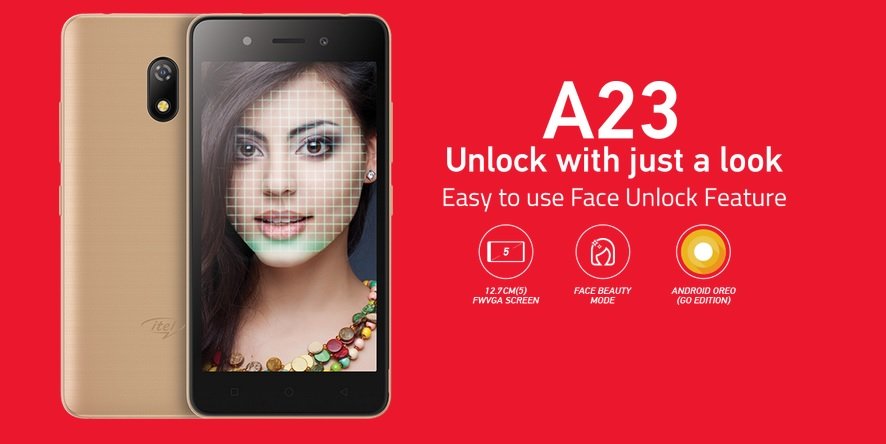 Fortunately, the phone is the updated variants of the A22 and A22 Pro, and they all run on Android 8.0 Oreo, (Go Edition). The Itel A23 is a little bit outdated, especially the small screen size display, and the monstrous bezels surrounding the top and bottom bezels.

The A23 Smartphone arrives with a portable 5.0 FWVGA TN 196 PPI and screen resolution of 480 x 854 pixels. Clearly, this specs and features were highlighted, to particularly indicate that the phone is targeted at the affordable market.

Itel mobile boasted that the screen display and resolution will “leave you wide-eyed” probably, that is their own way of saying ‘big screen entertainment’ Anyways, this isn’t bad but lets come to understanding that the display is quaint.

The company also said that the back design is made up of Normal Paint and it is available in two major colors, Phantom Black, and Champagne Gold color options. And it has a dimension of 145 x 73 x 9.75mm and it weighs much more lesser.

Itel A23 lacks a fingerprint sensor scanner at the back, and front. But that doesn’t stop the company from adding another significant biometric sensor at the back, it is the Face ID Unlock, that allows you to use your face as your passwords.

Itel isn’t the first OEMs company to make use of the feature, other Chinese companies such as Vivo, Oppo and others have indulge themselves. For example, take a look at Vivo Y93 and the Oppo A5. Although, the specs are incomparable to the Itel A23.

The phone arrives with a single camera at the front and back. Well, the phone did not come with the any form of notch design, that means, the selfie camera is being hold up at the large top bezels,

At the front, the A23 arrives with VGA selfie snapper and it arrives with a front flash for taking amazing shots, even at night. Anyways, the selfie front facing camera doubles as the Face ID Unlock. This is what the company is calling: ‘Smart Face Unlock’.

Where you can easily convert your Face as your password to unlocks your phone. Itel mobile also claims that ‘it is fast It’s secure. It’s super-convenient.’ However, we haven’t tested that out, and they also included ‘No pincode and pattern necessary anymore.’

Meanwhile at the back, they have mounted a more realistic 2-megapixels selfie snapper and a back camera flash for enhance shots. As to whether the cameras are equipped with the latest AI features, we aren’t sure about that.

But wait, the Itel A23 Smartphone arrives with 4G LTE network and connectivity, this is a YES – YES for a low-end Smartphone. The 4G feature allows you to browse the internet at a faster frequency and smarter downloading speed. Others includes GSM, EDGE, WCDMA, WiFi, Bluetooth v4.0, GPS/AGPS but lacks a OTG support.

Itel A23 is a low-end Smartphone, and it is powered by a Quad-core 1.4GHz with a graphic processor of Mali T820, 600MHz. The processor and GPU will optimize the battery and enhance the games played via the mobile phone.

The handset comes with 1GB RAM, this is normal but every Android GO Smartphone. Which will provide more seamless performance, and also enable quicker multitasking, without slowly the phone or putting it in a mode of confusion -lagging.

And it comes with 8GB of in-built storage. Thankfully, it is expandable up to 32GB via micro SD card slot. This will allow you to store more files, such as your documents for Annotations, Photos, Movies, Games, Applications and other funny videos.

Of course, it is a multiple SIM cards phone, by that, I mean it support dual SIM mode. Which is the 2 slots (Dual standby). And comes with 3.5mm earphone jack. The phone is fueled by a 2050mAh battery capacity, which is removable.

But the company claims that it can withstand a 20H Talk time, but it is a little bit compromised, when you are either browsing within 3G and 4G networks. And it support 320H of standby. And it runs on the latest Android 8.0 Oreo (Go Edition) Know more about this OS HERE.

Price of Itel A23

For the pricing and availability, the Itel A23 is priced around N15,000 – N25,000 in Nigeria currency. But right now, it is not available for purchase, but will be ready to start arriving in stores and for shipping in the next coming weeks.

The Itel A23 Smartphone arrives with an impressive specs and features, but surprisingly, I still felt that bound between me and the Itel A32F (No, don’t look at me that way) Well, we expect the phone to be much more affordable and economically priced. Anyways, if you got the phone first hand, please lets us know your experience!