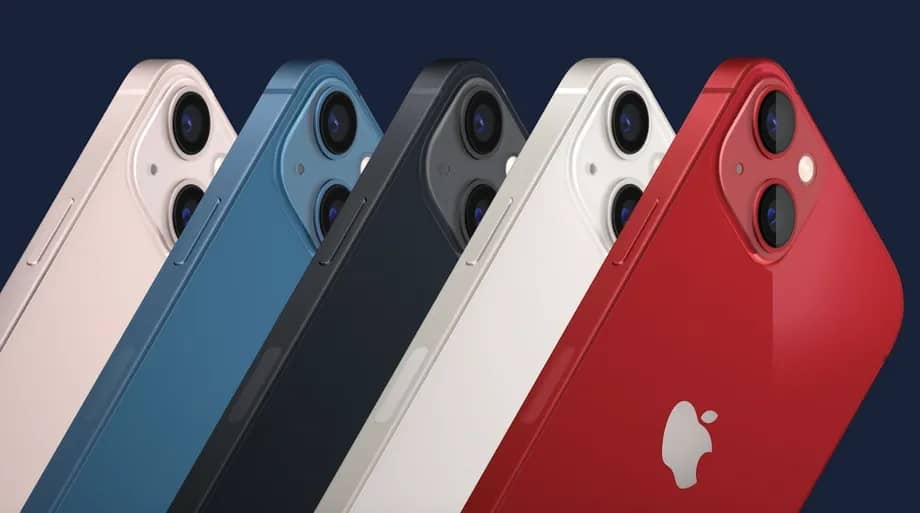 With a familiar design, Apple officially introduces the iPhone 13 and iPhone 13 Mini with a better and upgraded camera setup and a notably smaller and minimal notch display at the top. The iPhone 13 and 13 Mini is the baseline for Apple’s 2021 iPhone series.

Meanwhile, Apple did not mention any particular figures. This is all thanks to the bigger batteries, the iPhone 13 and iPhone 13 mini A15 Bionic chips with better performance, and additional software improvements and optimizations.

The appearance is just like last year’s series, starting with the entry-level iPhone 13 featuring a 6.1-inch and the smaller 5.4-inch iPhone 13 Mini – OLED Super Retina XDR displays, support for HDR and Dolby Vision but it is brighter than last year’s model.

Featuring a 28% brightness outdoors at 800 nits, with higher peak brightness for HDR at 1200 nits. However, the sides are still aluminum sandwiched between two slabs of glass – the Ceramic Shield protection that was introduced in the iPhone 12.

Obviously, they lack a 120Hz display refresh rate, you won’t get those high-rated smooth scrolling as other flagship. These iPhone 13 series are stuck at 60Hz – similar to every iPhone so far. Moreover, the distinctive Face ID notch is 20% smaller, which will take up less space at the top of your phone.

A15 Bionic – That is the powerful 5nm chipset powering up the iPhone 13 and iPhone 13 Mini with a 6-core CPU – Apple boasted that it is faster and more power-efficient than last year’s A14 Bionic chip. The company also claims that it’s the “fastest CPU in a smartphone,”

That is in respect to the 6-core CPU – with two new high-performance and four new high-efficiency cores. Apple claimed up to 50% faster than the competition and GPU is up to 30% faster than its competitors – competitors which Apple failed to mention.

It also arrives with a new ISP on board, twice the amount of cache, as well as a new display engine and new video encoders and decoders. Talking about the cameras, the iPhone 13 generation camera is surprisingly known and unique – expressively known – the biggest change.

On the front, there’s a 12-megapixels TrueDepth selfie camera with a Centre Stage feature that follows you around in the frame automatically, as well as accommodate more people. Features Retina Flash, HDR video recording with Dolby Vision up to 4K at 60 fps, and Slo‑mo 1080p at 120fps.

There are two rear cameras – a 12-megapixels wide main sensor with 1.7µm pixels and a 26mm f/1.6 lens and 12-megapixel ultrawide camera features a faster f/2.4 lens and 120-degree field of view.

This is culled from the Apple 2020’s biggest smartphone camera, iPhone 12 Pro Max, where there is a physically larger sensor for the wide camera, which is 47% bigger than last year. Which allows it to capture more light in darker environments with less noise.

Another new feature is the “photographic profiles” from the iPhone 13 Pro and Pro Max models, which allow you to customize the look of your photos even further for more consistency across shots.

In addition, Apple added what is called “cinematic mode” for a video that allows for a rack focus effect to change the focus during a video. The Cinematic mode records videos of people, pets, and objects with a beautiful depth effect with automatic focus changes.

How does it work? Now when recording a video, the cinematic mode will automatically transition focus while filming in real-time, intelligently shifting focus when people enter the frame or glance away from the camera.

From that, the user will be able to manually change focus or lock focus on a particular object for more precise control, too. Apple even went a notch up with the cinematic mode, allowing the front-facing camera to support the mode.

Both are IP68-rated metal bodies, which can go deep as 6meters for up to 30 minutes. These iPhone 13 series come in five aluminum colors, – Starlight, Midnight, Blue, Pink, and the (PRODUCT) RED edition, as usual.

Compared to the iPhone 12, Apple promised improved 5G performance with more band support for better international 5G experiences. Apple also said that the iPhone will support 200 carriers in over 60 countries and regions by the end of the year. These run iOS 15.

The iPhone 13 and 13 mini will be available for pre-order starting Friday, September 17, at 5 a.m. PDT in over 30 countries, including Australia, Canada, China, Germany, India, Japan, the UK, and the US. However, these phones will start shipping on September 24.