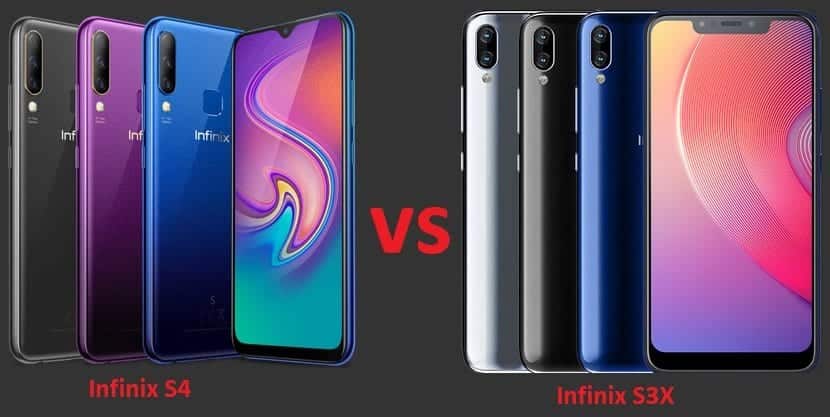 The Infinix S4 and Infinix S3X both arrives with some spectacular specs, but which is much more better than the other? lets find out.

The both phones are categorized under the company’s S-series, while both being a selfie-centric phone, the S4 is much of a latest specs device with impressive features.

Both mobile handsets comes with a 6.2″ HD+ 19:9 Full-view screen with a notch display, although the notch design is quite different from each other.

On the storage, you can find the same 32GB / 64GB internal storage, and you can really expand them up to 128GB storage via a dedicated microSD card slot.

While they run on Android OS, but different version out of the box, you can also find the latest 4G LTE connectivity features on both devices.

And you can also find the Fingerprint sensor scanner at the back of the S4 and S3X, and they are both backed by a non-removable 4000mAh Li-ion battery capacity.

The Infinix S3X comes with a plastic and metal combination design, while the aesthetic dual 2.5d glass body design on the Infinix S4 is actually stunning!

On the other hand, the Infinix S4 boasts of a dewdrop, waterdrop or dot notch display, which is much more smaller than the Infinix S3X’s trapezoid notch design.

It is also available in Midnight Black, Nebular Blue, and Sapphire Cyan color options, while the S3X comes with Black, Grey, and Blue options.

For the performance, the Infinix S4 is powered by a Octa-core MediaTek MT6762 Helio P22 SoC, but the Infinix S3X is built around Qualcomm Snapdragon 430 running at 1.4GHz Octa-core processor.

Both phones appears as camera and selfie centric devices, and backed by Artificial intelligence, AI. But the Infinix S4 is much more smarter and powerful.

While the S4 arrives with 32-megapixels selfie shooter, the S3X comes with a 16-megapixels front facing camera lens, and they are both enhanced with AI.

At the back of the phones sits a vertically aligned cameras, the S4 with a triple rear camera setup of 13-megapixels + 8-megapixels + 2-megapixels for in-depth capturing with Quad-flash support.

And the Infinix S3X with dual rear camera setup, which consists of 13-megapixels and 2-megapixels camera lens and dual LED flash and Bokeh Effect.

The Infinix S4 comes with a bunch of handful camera features, and the back camera is backed by a Quad-flash support. However, the S3X is lacking the 8MP wide-angle lens on the S4.