It looks like Infinix Official Fanpage CEO Infinix Mobility Benjamin Jiang has been proposing on something that is coming wide from Infinix lately!

Maybe, it might be the incoming Infinix Zero 5 OR Infinix Note 4 with Edge-less design  that might be seen on the Infinix Zero 4 Edge Smartphone or maybe out of the box! Well, for now we don’t have any specifications to show proof but there is little.

Benjamin Jiang took to his fanpage on August 29 exactly 12:46pm to ask fans weather do they love this curve? (As shown below)

The fans reacted some much positive reply to it! Some said, the curves were okay, some went ahead to type Zero 4! But nobody said about Infinix Note 3 Pro! We are still watching tho!

Then on September 2 exactly 12:51pm, he dropped another bomb by asking Do you need a pen for note? How much you can accept? And once again, his fans did a large turn up by replying positively to his question. Some said, it shouldn’t be called a Note, others said app. is 30$ and any other amount that can be affordable.

Meanwhile, most people were deliberating on GYROSCOPE SENSOR! Something that is on LG G2x! Although, you meant know about Fingerprint sensor and Iris Scanner but this is a simple explanation about the meaning and work of GYROSCOPE SENSOR. Below is a little explanation:

The gyroscope, or gyro for short, adds an additional dimension to the information supplied by the accelerometer by tracking rotation or twist.

Much said, little keywords and simple end line! Yes, we have said enough but the keywords are little, and the end of discussion is so simple and short, all you have to know is that Infinix Mobility is planning on launching a Newer phone either before the end of September or October. 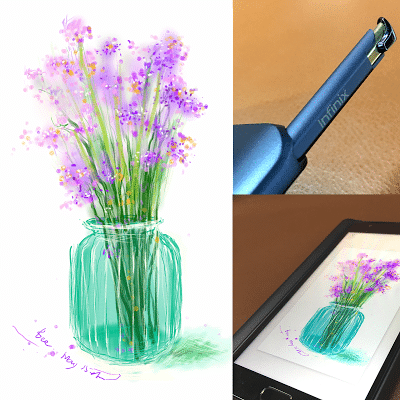 Please take this as a Pinch of Salt! Thank you!