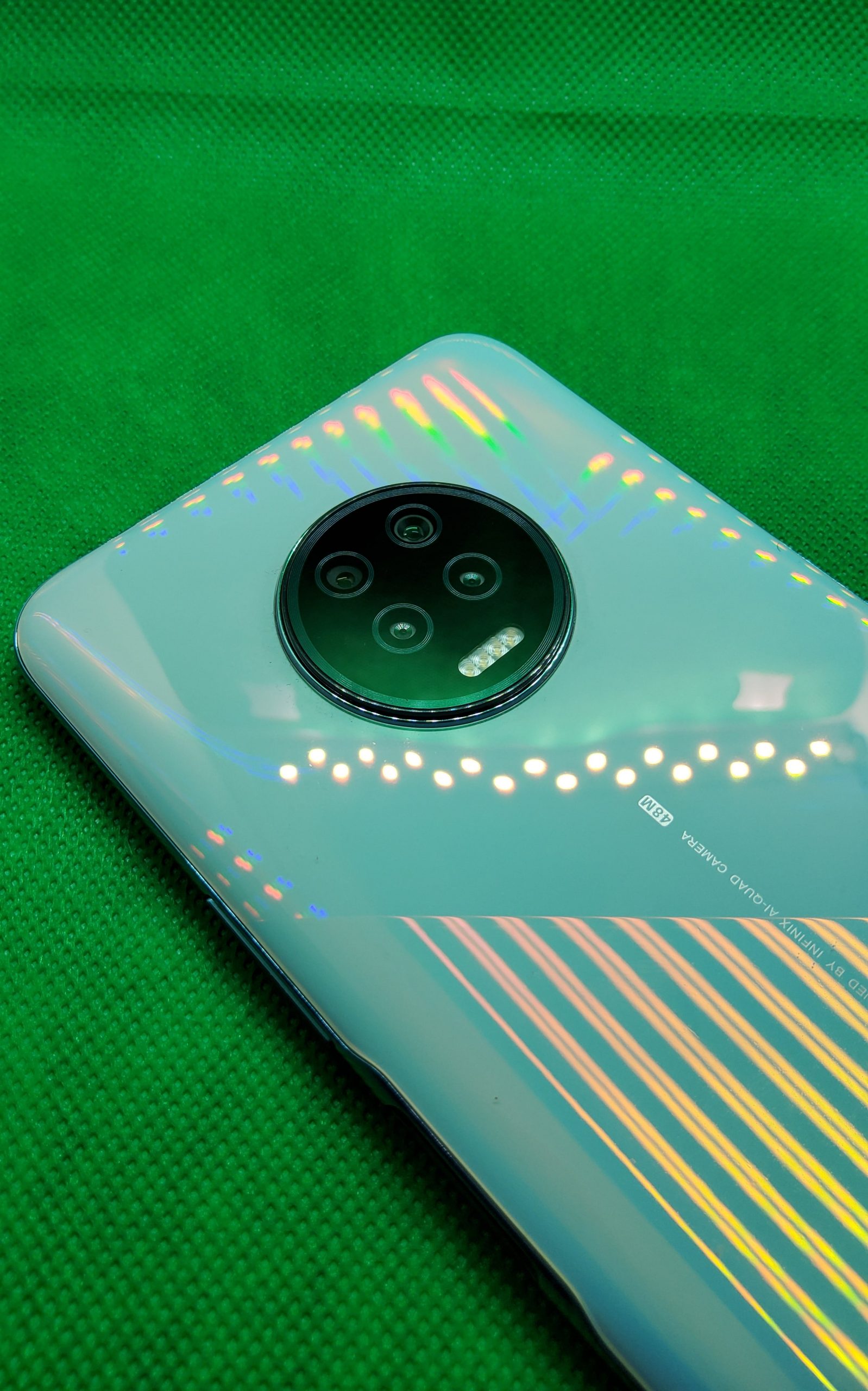 Officially introducing to you is another dauntless contender, prudently named the Infinix Note 7 with a taller screen display. The naming scheme is quite sincere, it is after all the follow-up and the successor to the Note 6 that was launched last year.

The company has certainly been great for the last couple of years, Infinix started to branch its devices into specific use cases. We’ve seen Infinix HOT series, Zero series, S-series, and others. Each of these series offers countless specific features a customer might want in a device. The major issue isn’t about how good the phones are, esp in today’s super-saturated phone market, great isn’t quite good enough.

Having an Infinix Note without a pen, the X-Pen is definitely a huge turnup! I feel dump-found when I recur what Note 6’s X-Pen did to my one week of using the phone, instigating wavering, 30mins of rendering useless, and others.

I am totally over that, and also glad that Infinix mobility is taking that headache off Note 7 and the Lite version. One thing is certain, the Infinix NOTE line has always been popular with consumers, and traditionally offered great value to users with a streamlined Android experience and all the Google apps you might need for your daily life.

We are quite excited to have the Infinix Note 7 especially for the fact that the focus for this device provides a more preferable Android experience but not at an affordable price. The Note 7 in 6GB RAM goes for N87k, 4GB RAM for N77k, and less.

Firstly, holding an Infinix phone boasts your morale especially with the lucid design, and it kind of differentiates you from the others within the room, alongside the gradient color options.

But the Infinix NOTE is the major bomb, the big, and bold screen makes people’s eyes turn around to take a look. Then, the company introduced the X-pen, and it changed everything about the note for a period of time.

The X-pen on the Note series isn’t just a groundbreaking scheme, but it also pushed other series lovers, Smartphone users to want to taste that ‘fresh and unique feature. Sincerely, at first, it was awesome, imagine holding an Infinix phone and operating it with a pen in a crowded area -oh yea, you felt those eyes lurking around you!

With the X-pen, you can draw, write annotations, and many more other things. It is like holding a Samsung phone with a Stylus pen, but then later, the pen starts mutating how the phone works and operate(speaking from the Note 6 experience), making it a total flop.

But today, things are different, the Infinix Note 7 is different from others. Why wouldn’t it be, after all, it is the company’s latest in the Note series, and Infinix is not just targeting Africa market anymore, Asia and Europe market has entered the map.

…you will feel the jellied and glossy premium finishing, though it is a mid-range top-notch phone

On first sighting the phone in the Bolivia Blue option, I was quite amazed by the shiny gradient design. But what actually got me and my crew was the back rounded bumped up camera tray. Although this is not the first time for such rounded camera placement, other Chinese Smartphones are also involved in it also, such as Vivo, Oppo, etc.

After using the phone for over a week, and still cannot provide a better video review because I am missing some videography accessories, “air quote” I will definitely do my best for the best honest article review.

Still holding the phone in my hand, and it is solid, but not at a wallet-friendly price. Pulling out the phone from the package, you will feel the jellied and glossy premium finishing, though it is a mid-range top-notch phone.

Infinix says the phones arrive in a “Gem cut finish” and further said it “creates subtle patterns and highlights with every angle” It definitely brings out the curved edges around the back, with the metal-like around the phone.

With the gem cut finish as announced by Infinix, we’d expect the phone to be water-resistance for at least some occasional splash and dustproof., after all, it is made out of gemstone. But the company did not mention that anyways, which invariably means that you should not try to get into any form of water.

The phone isn’t that slim, but at 8.75m thickness, it is a deal-breaking feature. There is the 3.5mm headphone audio jack which is especially welcome to see on a 2020 phone, intrusive MicroUSB 3.1 charging port, and dual stereo speakers featuring DTS audio speaker grill under the phone.

On the sides of the phone is the volume up/down, and fingerprint sensor scanner, which doubles as the power button also. I am with the Bolivia blue, but others include the Forest Green and Aether Black color options.

And yes, Infinix added something this time around, it is the magnificent tall 6.95-inch display, and the bezels are quite slimmer, which is expected of most current phones. Other Note phones are mostly shorter and feature big chunky bezels, which are a turnoff.

With the Note 7 tall 6.95-inch display, you can do more, bringing a bigger cinematic picture and wide scrolling to you and boasts of 91.5% screen-to-body ratio, offering mid-range 720 pixels HD+ 20.5:9 Infinity-O display. But with the Helio G70, the phone could have support up to 1080p screen resolution and tall 21:9.

It is quite bigger than the 6.01-inches on the Infinix Note 6, but very unattractive with its 720p LCD screen, where the Note 6 offers 1080p AMOLED 2.5D Curved screen. Both are lacking the fastest processor, including the trending 90Hz refresh rate that exposes the phone to smooth and sharp scrolling.

The 720p panel running at 1520 x 720 looks fine from a distance, but nicked edges and blurry text start to appear when you look up close. But the salient point is that the Infinix Note 7 is a substantial upgrade over last year’s model.

Infinix Note 7 can definitely wow you indoors, but the outdoor brightness experience is slightly welcoming. Of course, the bright colors offer great performance when you are inside, but outside, the brightness of the sun overpowers that.

But hey, it isn’t that expensive when compared to other high-end premium phones out there on the market, that is why you can’t see the HDR10+ spec and 90Hz refresh rate anyways.

The design and display contribute to huge parts of the equation, but to add up another fraction, Infinix did come out perfectly for the beautiful round camera tray, it isn’t a groundbreaking feature but it is definitely unique, especially for a company that is newly expanding its horizon from Africa.

At the back is a QUAD camera setup offering depth/portrait, a macro sensor, and an f/1.8, 2.8μm 1080P low-light video camera. The main camera is the 48-megapixels ultra-high resolution with a 6 element lens, 1.6μm, f/1.79 aperture. Infinix boasts that the camera offers almost 40 times the phone screen resolution, which is 8000 x 6000.

Other features include the Slow motion, short video that offers a 15seconds/60seconds video, AI cam, beauty mode, bokeh/portrait effect, AR shot which is cool, panorama, and the document for capturing physical documents. It also supports the Google lens.

The Super night feature which uses the AI Image Stabilisation, allows the Night mode to shoot blur-free and focused handheld photos in low-light. The depth camera worked as expected, but I didn’t really test out the macro lens for shooting close-up details, but it should be great, but still incomparable to premium flagship phones.

While the front offers a single 16-megapixels inside the single-camera cut-out, which is the hole-punch. The selfie features include a wide selfie, AR shot, portrait mode, beauty mode, AI cam, and a short video.

When you open the camera and it stays inactive for a few seconds, it displays that the camera enters power-saving mode. Double click on the screen to wake up.

The company chipped in the 2020 MediaTek gaming processor inside the Note 7, it is the Helio G70 Octa-Core 12nm processor, better than the Helio P35 on the Note 6. While the Note 7 Lite carries the MediaTek Helio P22 SoC.

MediaTek Helio G70 is a gaming-oriented chipset for entry-level phones, and for affordable mid-range phones also. It houses two Cortex-A75 cores at 2GHz, plus six A55 cores, the new A76 cores.

With this, I played a few games on Note 7, and I got good results. The graphic is controlled by the Mali-G52 2EEMC2 GPU running at 820Mhz. You will enjoy a good gaming time period with the phone.

It comes with a game mode that improves user’s experience during gaming, and the company also boasts that the Helio G70 carries 90% single CPU frequency upgrade, 43% multi CPU frequency, and 100% GPU image rendering frequency upgrade compared with the P35 chipset on the predecessor, the Infinx NOTE 6.

Anyways, I got the 6GB RAM with 128GB internal storage, but the company noted that there is another 4GB RAM on both Note 7/7 Lite. And they are expandable up to 2T via a MicroSD card slot.

It is fast, and yes, there is a notification LED on the top of the display. I noticed something during the charging, the charger is generating some buzzing sound, and trust me, it is not a faulty wall socket. Because I tried with numerous other sockets, with other chargers, but this particular one seems to be the one generating such sizzling, popping, or crackling sounds.

Aside from that, the phone charges very fast, especially at the first charge. For other times, it starts from 7:20 at 76% and up to 96% by 7:56, which was definitely impressive. This explains that the 5000mAh with 18W Supercharge 3.0 tech will always guide you thru.

During the gaming period, it lasted long, and longer whilst performing other features also. You will never get lost using the massive 5000mAh battery capacity on the Note 7.

Biometric sensor and other features

The phone comes with a side-mounted fingerprint sensor, which also doubles as the power button. The unlocking period is under 0.3seconds and that was impressive. The Face Unlock feature is also faster, and that is a start. But you can still lock your phone with other traditional methods also.

Infinix said the phone comes with Super easy WiFi share, that allows other people to connect to your Wifi, by scanning through a QR code. There is the Live Transcribe that allows you to communicate at the moment.

It comes with LED notification, and scrolling down from the up, you can activate Dark mode thanks to the company’s XOS 6.0 skin, game mode, Whatsapp mode, one-hand mode, silent screen recording, DTS sounds, and many others. The sound of the phone is awesome.

The company also noted that the phone supports the V gesture, which allows you to simply draw a “V” gesture in the air to answer calls and hover your Palm above the screen to reject calls. There are many other gestures navigation also.

In conclusion, the Note 7 is unlike anything Infinix has made before, but it is still very much like other mid-range phones out there on the market. Despite any verdict, Infinix mobility is still one of the biggest fish in the sea, especially in the Africa market.