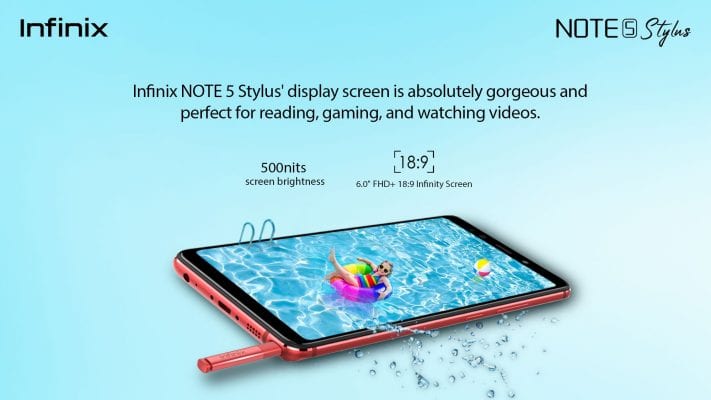 Finally, Infinix unveils the slightly upgraded version of the Infinix Note 5, say hello to Infinix Note 5 Pro Stylus Android Smartphone. One of the major difference is the availability of a “Stylus’ pen with 4096 level pressure.

Thankfully, we can all say the bezels on the top and bottom are really minimal. The Stylus placed inside the Note 5 Pro is more sensational and attractive!

Infinix Note 5 PRO Stylus is a more portable Smartphone than the Note 4 or Note 4 Pro. However, the cameras and the phone itself is promoted with AI (Artificial Intelligent) features, which supports the front and back cameras.

The Infinix Note 5 Pro with Stylus pen is what got everyone focused and interested. We are all aware that S-pen is Samsung Note’s series signature, hence, newer specs and features are frequently added to the Galaxy Note families.

And I seriously think, Infinix is beginning to do the same for their Note series. Like the Galaxy Note 9 with S-pen, the Infinix Note 5 Pro Stylus don’t need bulky battery charger to power it up, it magnificently sit inside your phone and recharges there.

That is a huge difference from Note 4 Pro with Stylus Pen, which needed a bulky case for charging the Stylus. Well, the Stylus pen isn’t the only difference. Also know that Note 5 Stylus is the company’s second phone with Stylus pen.

The Note 5 holds a 12-megapixels camera with f/2.0 aperture and 1.25um pixel size but we all thought the Note 5 Pro will arrive with dual cameras but the company decided to increase the sensor to 16-megapixels f1.8 aperture with a flashlights.

While the selfie snapper still remains at 16-megapixels with support for low-light photos. It is a self-claimed TheIntelligentCreator, hence, the cameras comes with AI enhancements. 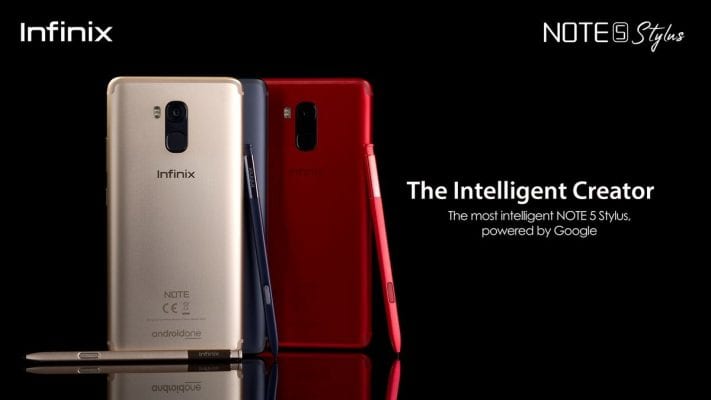 The processor remains the same, alongside with the 4GB RAM. The Infinix Note 5 comes in two difference variants, 3GB RAM and 4GB RAM. While the Note 5 Stylus is stalked at 4GB RAM.

The processor are similar, both phones are powered by a 64-bit Octa-core 2.0 GHz Cortex-A53, on a  MediaTek Helio P23 MT6763T chipset. While the ARM Mali-G71 770MHz handles the graphic performance.

Infinix Mobility are asking a little more money for Note 5 Stylus Pro, with few advanced specifications and features. The pricing has been slated to N69,000 and it is available in all authorized retailer shop. Thankfully, it is NOT greater than N100,000, as predicted.

The Infinix Note 5 stylus pre-order price has commenced at N3000 and will end on the 15th of September 2018.