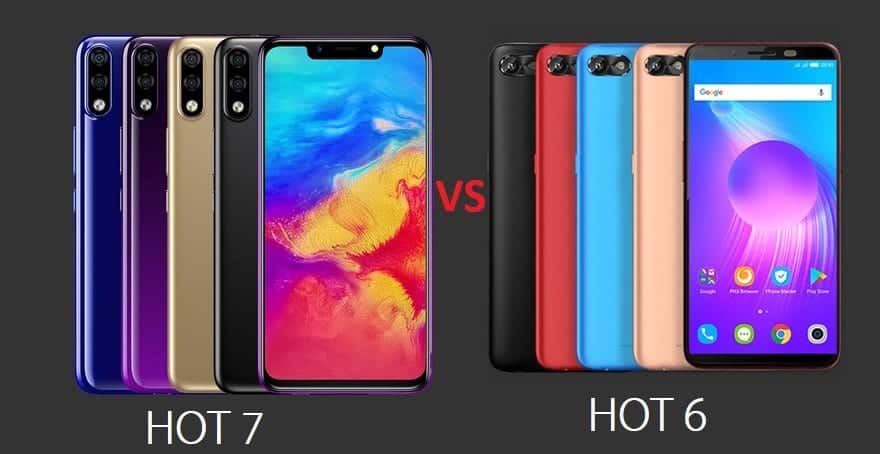 The Infinix HOT 6 vs Infinix HOT 7 mobile handset, the both comes with a lot of specs differences, and little similarities.

For starters, the both phones are featured under the Infinix HOT series family, and you can view the trendy specs, design and performance on the HOT 7 Smartphone.

You might likely notice the notch display design on the HOT 7, and slimmer bezels on the HOT 6, which is featured both at the top and bottom of the phone.

Anyways, lets take a quick review of the full similarities and differences between the Infinix HOT 6 and Infinix HOT 7 Android powered Smartphones.

One of the biggest similarities between the both phones is the RAM models, there both arrives in 1GB and 2GB of RAM, 16GB of internal storage, which boasts the handset performance.

Another major linking features, is that both the HOT 6 and HOT 7 runs on the same Android OREO 8.1 out of the box, with the company’s skin atop.

The Infinix HOT 6 and HOT 7 comes with Fingerprint sensor scanner and Face ID recognition. Both biometric features are available for more enhanced security.

Both devices are professionally made for entertainment purposes, that’s the why we could find the Dirac mode and dual speaker on the HOT 6.

The front cameras of the both phones are just the same, they sports an 8-megapixels selfie snapper with with 2 soft light flash, and can even shoot videos at 1080P @ 30FPS.

While the HOT 6 and HOT 7 are both backed by a 4000mAh battery capacity, including the network and connectivity features, which are exclusively the same.

It seems that the colors are almost the same, but the HOT arrives with Gold, Red, Blue and Black colors, while the HOT 7 comes with Sky Blue, Champagne Gold, Milan Black, and Purple options.

Both phones support dual SIM mode, but the HOT 6 supports Dual Micro SIM and OTG, while the HOT 7 goes with Dual Nano SIM mode and NO OTG.

The Infinix HOT 7 comes in both 16GB and 32GB of internal storage, but the HOT 6 is only stock at 16GB, but you can easily expand it via microSD card slot.

To claim the improved camera quality, the HOT 7 packs a dual rear camera setup, which consists of dual 13-megapixels camera lens, while the HOT 6 with a single 13-megapixels lens.

The charge output of the both phones are different from each other, as the HOT 7 comes with 5V-1.2A, while the HOT 6 arrives with 5V-2A charge output.

In summary, both phones are amazing and quite impressive, it will definitely embrace the affordable price range. As to answer the question, yes, the Infinix HOT 7 is a dignified 2019 sequel!

Which of the HOT series device are you going for? which is much more better especially at the budgeted level? Lets hear your thoughts using the comment box.