Infinix Mobile phone has finally launched their aspiring Smartphone device, which would be added to Hot series. Introducing to you is the Infinix Hot 6 pro smartphone with codename ‘Infinix X608’ which is definitely the successor to the Infinix Hot 5.

Surprisingly, the Hot 6 pro is the first Smartphone to be fully unveiled in 2018 apart from the re-branded Hot S3.

This isn’t the first time, Infinix will be launching a device with FullView display 18:9 aspect ratio with high screen-to-body ratio, however, they are both the latest technology that is popular and features in numerous gadgets out there.

Applauding Infinix, the phone is the second Smartphone to sports a dual rear camera setup, it was first seen on Zero 5.

Thanks to heaven, Infinix didn’t skip their customers review, wants and need. The device features a high-rated camera pixels, wide-screen view, acceptable RAM, huge battery capacity, it is definitely what you have been looking for. 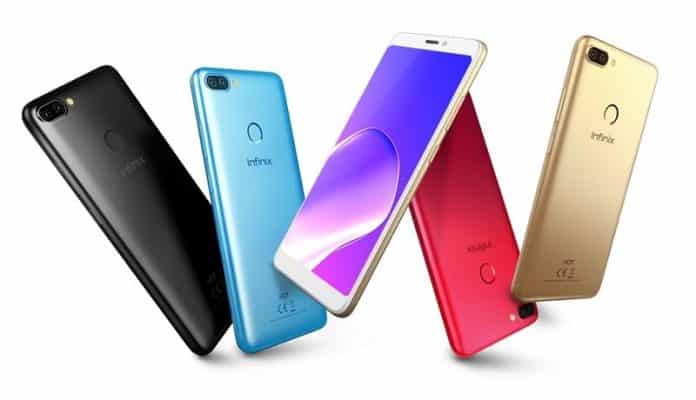 From afar, you would have thought of a premium Smartphone but on a closer look, the Infinix Hot 6 brings in a dazzling and glowing color under the sunlight.

The company incorporated the popular 18:9 aspect ratio on the HOT 6 Pro.

With such aspect ratio, the device is positioned to serve you the best. It gives you Full View display than a 16:9 aspect ratio and it feels more comfortable, esp when holding with one hand.

Although, the bezels are trimmed down slightly but the on the bottom, you would still notice some high and huge bezels.

It allows you to see clearer, when playing games, watching movies etc.

This is first Android Smartphone to come to Kenya in 2018 and also the second device from Infinix mobile to sports a dual camera setup on the back.

The company has failed to explain the function of the both camera appropriately.

But with the 13-mega pixels as the main sensor, the phone takes cool conspicuous images in portraits mode and auto-focus clearly while the 2-megapixels stabilizes the photo even during the day and night shot but as a mid-ranger, don’t expect much.

The phone can shoot video up to 1080p @ 30fps, Despite coming with 720p, the handset has proven itself worthy of being among the top respected camera phone out there.

On the front, it features a 5-megapixels for selfie fans. The selfie snapper also supports Face unlock, facial recognition that helps you top up your security.

While on the network and connectivity, the phone features, 2G GSM, 3G WCDMA, 4G LTE, Wi-Fi, Bluetooth v4.2, GPS, for fast browsing and download, wireless and wired connections, location viewing and many more.

At first, during the Hot 6 Pro rumors, it was expected to run on MediaTek Helio P23 but the company deem it fit to go the Hot S3 way by bringing in an older version of Qualcomm processor, the Snapdragon 430 along at 1.4GHz Quad-core coupled with Adreno 308.

This processor allow the device to control it performance and graphics including intensice games.

The power house of the Smartphone has been taken care of with the huge 4000 mAh battery capacity, unfortunately, it is a removable battery but the company says that, it can lasts up to few hours on heavy usage or a day on light usage.

The fingerprint sensor scanner on the device is equally delicate and important to keeping the Hot series going and to keep it more secured, there is the new Face ID Unlock, the security is definitely smooth and easy.