Infinix knows the simple trick to keep getting their customers trust and have more coming for them, Infinix Mobility has release bunch of updates to their phones, flagship, mid-end, mid-range etc.

Of course, releasing and rolling out update to your company phone model, is what top Smartphone makers does each day. Unfortunately, some actually roll out the bad update to the good models, in order, for them to change their devices.

But Infinix isn’t like that, they roll out Android 8.1 Oreo OS update to most phones running on Android 7.0 Nougat, and that is attractive. Sincerely, it is much more preferable, instead of giving up your phone for last year or this model, just to get a new Android OS!

And not only that, during the Android nougat rolling out, to enhance it, Infinix launched an app, called Infinix system update app. It allows you to automatically download Android Nougat without passing through stress. 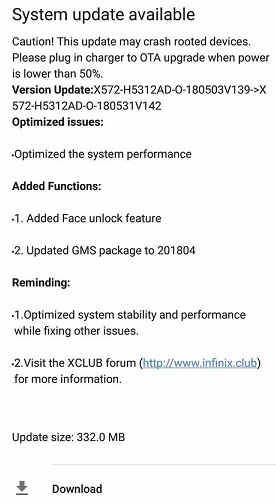 The most succinctly aspect of this article, is to let you know that Infinix is rolling out Face Unlock, to most of their phones out there, Infinix Note 4, Infinix Note 4 Pro users have started the installation!

The Face ID feature, allows you to make use of your face as your facial recognition password and it kind of aspiring! The new OTA update will add face unlock feature to your Infinix phone, especially the Note series.

Before you can go ahead and install update via OTA method. There are few requirement and instructions:
*. Your device won’t be rooted
*. You must have up to 95% of battery capacity
*. Backup your device
*. At least 500MB working data!
*. Now go to your phone settings
*. About Phone
*. Press check for latest update.
*. Is there any? Tap on “Download and Install”

It is expected to automatically begin the update! And the current phone that is supported includes, Infinix Note 4, Note 4 Pro, and many other users have confirm this particular update for their Infinix devices.