As dumb as it sounds, teenagers in Europe must be up 16years before they could have the access to one of the best messaging app worldwide, Whatsapp and it is definitely the truth.

As to whether, they need some applause, ovation or accolades, we can’t say for now. EU will be rolling out, new privacy rules dubbed GDPR (General Data Protection Regulation). The upcoming regulations or policy is only applicable to affect users in Europe from 16years or older.

WhatsApp will ask users to accept new terms of service in the coming weeks, and as part of that they’ll have to confirm that they’re at least 16. It’s not yet clear how WhatsApp will verify a user’s age, but we imagine it will probably be based on honesty. 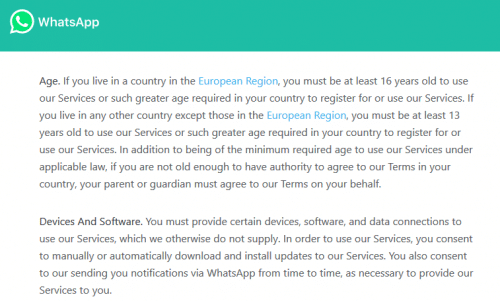 And also, WhatsApp users will soon allow you view and download your data in the coming weeks. Probably, this has to do with the changes, Cambridge scandal. Considering the fact that Facebook, owner of Whatsapp messaging app, may have come together -not to let the past repeat itself.

How to Get Real Ladies Whatsapp Numbers List in 2021