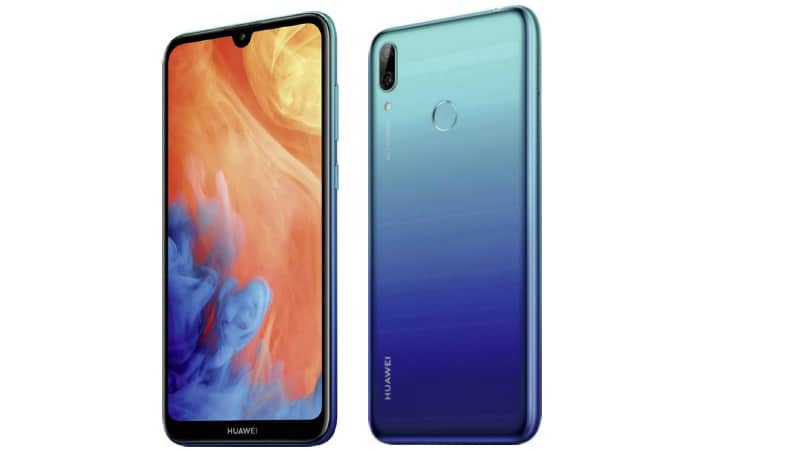 Huawei Y7 (2019) has been announced in Europe market, and it comes with 16-megapixel selfie sensor, Aurora Blue, Coral Red and Midnight Black colour options, and it runs on Android Oreo with EMUI 8.2.

But between the both phones, the newly launched Huawei Y7 (2019) comes with some lower-end specs and features than the Huawei Y7 Pro (2019) device, which was announced earlier.

The Huawei’s signature is written all over the body of the Smartphone, and you can also the company’s logo siting at the back of the phone.

Unlike the P Smart Plus (2019) device, it packs a dual camera at the back, while both of them arrives with water-drop notch display.

It is available in Aurora Blue, Coral Red and Midnight Black colour options, and you can also find the fingerprint sensor at the back of the phone., which was missing in the Huawei Y7 (2019) Pro variant.

Other hardware are seen promptly, there is the 3.5mm audio jack on the top edge of the phone, volume button rocks on the right edge, and then the SIM tray slot on the left edge.

Meanwhile, you can find the traditional Micro USB port and speaker grilles at the bottom edge of the phone. Which isn’t bad for such mobile handset.

For the optics of the phone, it arrives with a dual camera setup at the back, which consists of a primary 13-megapixel camera sensor, and another secondary 2-megapixel sensor with f/1.8 lens.

While the water-drop notch style houses a single 8-megapixel sensor, this is for taking selfies and Face Unlock. The back cameras comes with an LED flash.

The handset is powered by the Qualcomm Snapdragon 450 SoC, coupled with an Adreno 506 GPU, which is the graphic processor for enjoying those intensive gameplay.

Arrives with 3GB of RAM, alongside with 32GB of internal storage, which is expandable up to 512GB via a dedicated micro SD card slot.

It runs on Android Oreo with EMUI 8.2 out of the box, and it is fueled by a massive 4000mAh battery capacity, which can lasts for a period of time.

The Huawei Y7 (2019) is priced at EUR 220 and the phone is already on sale only in the European markets right now. The paint color job is all over the phone.