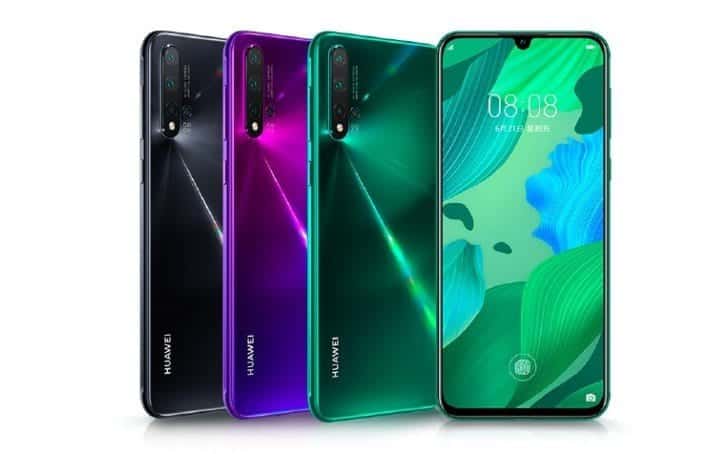 Huawei announces the Nova 5 series Android powered Smartphones on Friday, which includes the Nova 5, Nova 5 Pro, and Nova 5i. The phones comes with impressive specifications and features.

The Huawei Nova 5 and Nova 5 Pro comes with almost identical specs, as they both features the same screen size, Android OS, camera lens, and body design.

However, the company also announced the new HiSilicon Kirin 810 SoC, packs two Cortex-A76 cores clocked at 2.27GHz and six Cortex-A55 cores clocked at 1.88GHz, paired with Mali-G52 GPU but still based on the 7nm manufacturing process.

The Huawei nova 5 is the first phone to arrive with Huawei’s new Kirin 810 chipset. And it will not be available until mid-July.

During the launch, the company announced that they will also offer a limited-edition variant of the Nova 5 Pro in the Chinese market with slight design tweaks and bundled Freelace wireless headphones.

The body design on the both phones includes waterdrop-style notch, glass back design with 3D lighting effect, curved edges, and a slim body.

The mobile phones comes with a massive 32-megapixels front camera with f/2.0 aperture. And it also support AI HDR+ as well as support for night mode.

Well the onboard storage of the both phones uses Huawei’s EROFS filesystem. Which offers 20 percent better performance than the EXT filesystem that is present on many Android smartphones.

The power house of the both phones are engineered by a massive 3500mAh battery capacity with 40W HUAWEI SuperCharge fast charging that lets you charge the phone up to 50% in 15 minutes and 85% in 30 minutes.

Price of Nova 5 and Nova 5 PRO