Huawei Nova 4e has been launched in China, and it arrives with double-curved glass body, rear fingerprint sensor, a 6.15-inch screen, three rear cameras, a 32-megapixel selfie camera on the front.

Actually, the Nova 4e was introduced to China and Malaysia markets, and it is the official successor to the Huawei Nova 4 smartphone too.

However, the recently Huawei Nova 4e comes with lower specs than the Nova 4, which was unveiled last year’s December. It is just the toned down version of the Nova 4. 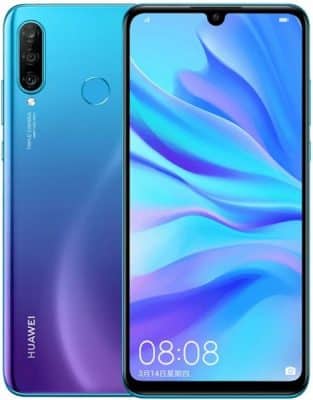 The Huawei Nova 4e Android Smartphone has an impressive 3D glass design at the back, alongside a reputable display with magnificent panels.

At the top, sit a water-drop notch display, which houses the fingerprint sensor scanner and delivers a minimal bezels at the top and a bottom chin.

The mobile handset is available in gradient Garland Blue, Pearl White, and Magic Night Black colours. A fingerprint sensor and triple camera setup sits at the back of the phone.

Huawei Nova 4e comes with four camera in total, a triple camera setup at the back and a single front facing selfie snapper, with other camera features.

While the water-drop notch display at the middle of the top screen display, hosts a single front facing 32-megapixel lens shooter with an f/2.0 lens, which is the selfie snapper.

Other camera features are intact, alongside with the regular network and connectivity such as Wi-Fi 802.11ac, 4G VoLTE, 3.5 mm headphone jack, USB Type-C port and others.

The phone is completely powered by a Kirin 710 SoC coupled with either 4GB or 6GB RAM, which delivers faster performance, battery optimization and seamless multitasking.

Recall that the Nova 4 handset, which was launched last December arrives with Kirin 970 SoC and 48 MP rear camera. Which is a large different from the Nova 4e.

And it runs on Android Pie-based EMUI 9 out of the box, with 128GB of internal storage, which is fortunately, expandable up to 512GB via a dedicated microSD card slot.

Like the trending stuffs with other Chinese Smartphone, the company also unveiled the Nova 4e with features like HiVision, GPU Turbo 2.0 and more.

The new handset is fueled by a massive 3,340mAh battery capacity with 18W fast charging, which allows the phone to stay longer for a couple of days, on a single charge.

Anyways, Huawei also introduced a new 6GB RAM variant of its Nova 4 smartphone, which is now on sale in China. However, the nova 4e will be unveiled internationally as P30 Lite on March 26.