Huawei launched the Honor 10 few hours ago. It comes with Full screen display and every details, features and specs, you might be looking for in a mid-range Smartphone but it looks more like the Huawei P20 or probably iPhone X!

The new Honor 10 arrives with the notch display design, we all have been against since but it looks like Huawei isn’t backing down. It comes with A1 camera, it is more cheaper than iPhone X, after all, it is a knock-off version of the both phones.

Like the P20 Pro with notch display, the newly announced Honor 10 Smartphone also comes with notch design but the difference here is that, users aren’t able to hide the notch display design like the P20 pro. There is the physical home button with the embedded fingerprint sensor scanner. 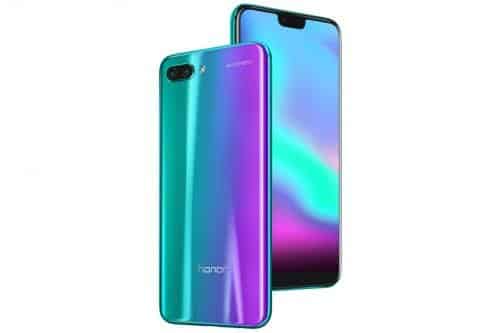 
The Honor 10 is notable cheaper than the Honor View 10 Smartphone. The phone packs an inspiring all-glass body design, impressive tall aspect ratio with home button, which was mainly criticized for the P20 and P20 pro. The phone really looks like high-end from the display design.

On the screen display, it comes with 5.84-inch 2,280 x 1,080 LCD, screen to body ratio is quite high but the because of the chin, there must be some adjustment while on the bottom, there is a USB-C port and a 3.5 mm headphone jack. It’s a dual-SIM phone available in Mirage Purple, Mirage Blue, Black and Grey.

But the Honor 10 is the cheaper variant of the both phones and there is pretty nothing much new on the phone expect for the fingerprint sensor, it features an ultrasonic fingerprint reader on the chin, this allows users to unlock their phone via fingerprint sensor even with wet fingers.

Don’t worry, the ultrasonic sensor isn’t new, it was already featured in Xiaomi’s Mi 5s. The phone packs a 24-megapixel sensor on the front for hi-res selfies, while the rear of the phone has a 16-megapixel and 24-megapixel dual setup with f/1.6 lenses.

It is an AI-equipped Kirin 970 chip processor, as seen on Huawei Mate 10 Pro. Comes in two different variants, 6GB + 64GB and 6GB + 128GB, there is price differentiation between both models. Runs on Android 8.1 Oreo with EMUI 8.1 on top.