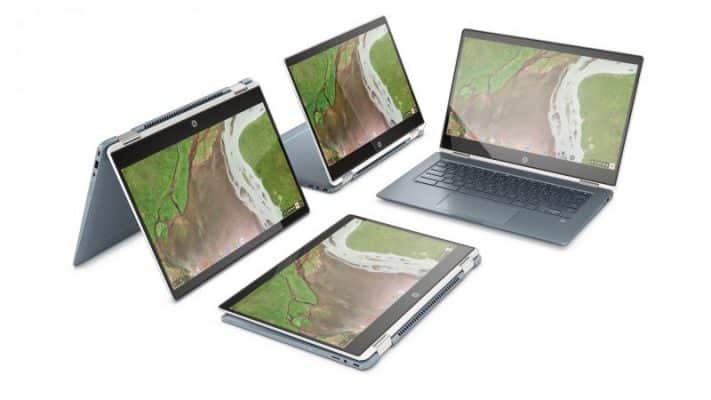 HP unveils their latest convertible Chromebook, HP Chromebook x360 14 and the company claims that it is the slimmest and thinnest Chromebook thats ever produced at just 16mm thick. Definitely, we will all fold out hands until it starts hitting the shelves.

It arrives in two different variants, there is the 8th Generation Intel i3 or i5 processor paired with 8GB RAM and 64GB SSD, with such chipset and high level of multitasking, it will sky high through little work power and many more. There’s also Intel Graphics 620.

Along with the thinner chassis, the new convertible Chromebook supports two USB Type-C ports, headphone jack, a standard sized USB Type-A port, and a microSD slot. The HP Chromebook x360 14 can serve as a laptop and then as a tablet.
Measures in at 12.81 in x 8.93 in x 0.63 in and also has a fully backlit keyboard. There’s also a “HD Wide Vision” webcam.

The new convertible HP Chromebook x360 14 runs on Chrome OS, and this is not surprisingly, as Google wants ChromeOS running on every single tablet, rather than Android. It skipped a detachable form factor like the HP Chromebook x2, instead it is a 2-in-1 laptop.

Fortunately, you can pre-order the HP Chromebook x360 14 right away on the company’s website or via Best Buy at $599, and it will starts hitting the shelves on October 21st. HP promise battery life of 13.5 hours on a single charge, this will compete with the upcoming Google’s Pixel Slate.