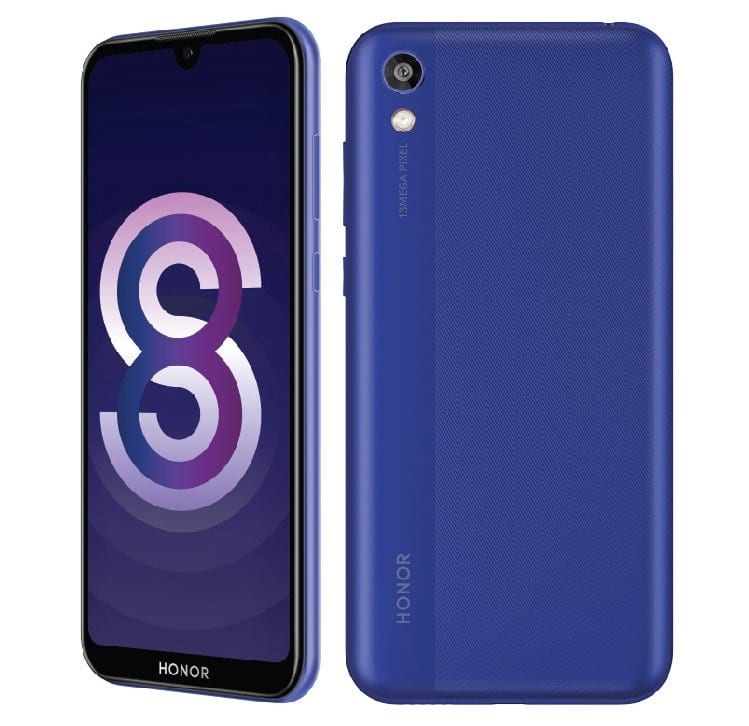 Honor 8S is an entry-level Android Smartphone with 5.71-inch HD+ LCD panel, dewdrop notch display, Face Unlock feature and it runs on Android 9 Pie out of the box.

The mobile handset is enhanced with different specs and features, and it was officially announced in Russia. And it is coming straight after the Huawei Y5 2019 was announced with Faux leather finish design.

Anyways, the both Smartphones arrives with the same specifications and features, only that the design is quite different from each other.

The Honor 8S sports a unique double texture back made out of plastic design, which is definitely amazing and quite distinctive from other mobile phones out there.

Being the company’s latest budgeted Smartphone, it packs some slim bezels around the screen display, and a chin at the bottom display.

The handset lacks a fingerprint sensor scanner at the back, and it is available in Black, Blue or Gold color options. You can pick one up in the coming weeks.

For the cameras, the mobile handset arrives with a single 13-megapixel rear camera with f/1.8 aperture. And it support single LED flash.

While the dewdrop notch display houses a single 5-megapixel front shooter with f/2.2 aperture. It also supports Face ID Unlock, using your face as your passwords.

Honor 8S is powered by a 12nm MediaTek Helio A22 chipset, which runs as a frequency of 2GHz Quad-Core processor. Along with IMG PowerVR GE-class GPU support.

It is available in a single variant, it is the 2GB of RAM, and 32GB of internal storage, which is expandable up to 512GB via a dedicated microSD card slot.