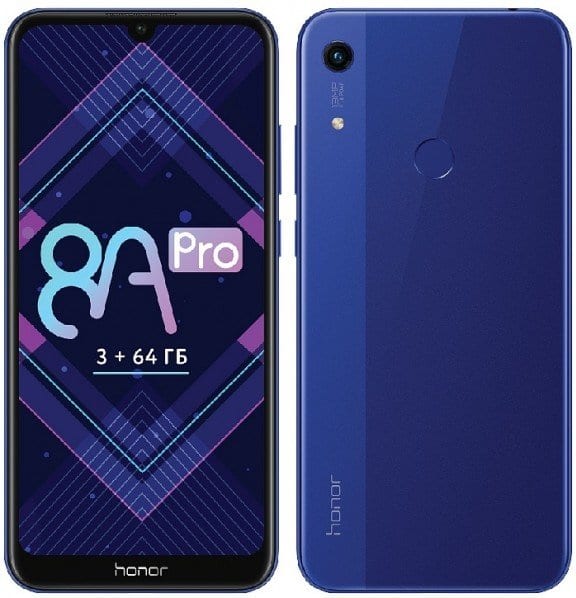 Honor 8A Pro Android Smartphone is now official, and it arrives with water-drop notch display, 8-megapixels selfie camera, and it is powered by a MediaTek Helio P35 SoC.

The Honor 8A Pro handset is the upgraded / souped up version of the already announced Play 8A, which was debuted earlier this year. However, the phone comes with amazing features.

Honor, Huawei’s sub-brand announced their latest 8A Pro mobile phone in Russia. However, before the official introduction, the phone has already been in talk, as it was first spotted in December, 2018.

The actual difference between the recently announced Honor 8A Pro vs the January Honor Play 8A is the presence of a rear fingerprint sensor scanner and higher memory storage.

The Honor 8A Pro is an Android powered Smartphone with exquisite sparkling design, but most of the specs and design are derived from the Play 8A mobile phone.

However, it is available in two colour variants – Black and Blue color option. And you can find a fingerprint sensor scanner mounted at the back along with a single camera lens.

For the camera aspect, the Honor 8A Pro comes with a 13-megapixel primary camera with an LED flash and f/1.8 aperture. It is enhanced with camera features.

While the water-drop notch style houses a single 8-megapixel selfie shooter. The phone comes with stunning selfie features, which allows you to take amazing cool pics for your social media account.

For the graphic processor, the handset is joined by PowerVR GE8320 GPU coupled with 3GB of RAM, which is essential for controlling the multitasking and fast switching of apps.

It is available in a single RAM and Storage option, packs a 64GB of inbuilt storage option and it can be expandable up to 512GB via a dedicated microSD card slot.

The handset is fueled by a 3,020mAh battery capacity, which is powered via a microUSB port. Honor 8A Pro runs on Android 9 Pie with EMUI 9.0.