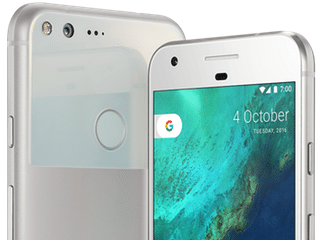 Finally, Google has launched the Pixel 2 and Pixel 2 XL on the 4th of October 2017 and the design is really breaking the internet, everyone seems to love the new phone from Google.

And also, the Google Pixel 2 and Pixel 2 XL is not a perfectly edge-to-edge look, but there are just the trimmest of bezels at the top and bottom of the screen.

On design aspect, the Pixels features a metal design and glass backs but a rather but then Pixel 2 has a more grippy metal surface.

And like the HTC’s U11, both of the Pixels comes with Active Edge which means that which means you can squeeze their sides to trigger certain actions.

Meanwhile, both phones have Snapdragon 835 processors, 4GB of RAM, and an option for 64GB or 128GB of storage.

Snapdragon 835 hopefully brings to the table is their improved battery life, thanks to something like 25 percent better efficiency.

Am not a bad news announcer but I would like you to know that we have lost the Headphone Jack for the new Google Phones! And well, thanks to Google Pixels Buds, it is not fully wireless.

And on the camera aspect, they each have front-facing stereo speakers and OLED displays, though the smaller Pixel has a 1080p resolution (for a density of 441 PPI) and the larger version has a 2880 x 1440 resolution (for an even denser 538 PPI).

And on the front facing camera, we have the 8-megapixel front-facing camera for taking some cool selfies.

Google “dual-pixel sensor,” which means that the pixels are a little bit smaller this year (1.4μm instead of last year’s 1.55μm).

On a very special day of my Life, Google is planning on launching another Pixel Smartphones powered on Android OS that Steve Jobs of Apple plans on rendering lifeless even to this death.

Well, there are some history concerning Jobs and Android but the recently launched iPhone series with the A11 Chip,virtually have everything stocked in!

If you could recall, the Pixel and Pixel XL, arrived on the 4th of October 2016, which is of course, the first phones to be officially branded as out-and-out Google phones.

And a year later, on the 4th of October 2017, Google is rumored to launched the Pixel 2 and Pixel 2 XL Smartphone at the event. Can’t wait for the event! (Probably, two event would be live that day)

The last year Pixel were made by HTC Phones and 2017 Pixels are rumored to be produced by LG and when you hear LG, it is definitely LG’s!

LG is making the Pixel 2 XL, a handset that’s supposed to deliver the all-screen smartphone experience you may be expecting from a 2017 Pixel creation.

On the HTC Pixel 2, we are looking at Qualcomm’s Snapdragon 835 chip that powers most of this year’s high-end Android handset. It’ll also ship with HTC’s Edge Sense feature that turns the edges of the phone into pressure-sensitive buttons.

Meanwhile, Google has sent out official press invites for its event, which will begin at 9AM PT / 12PM ET in San Francisco on October 4th.