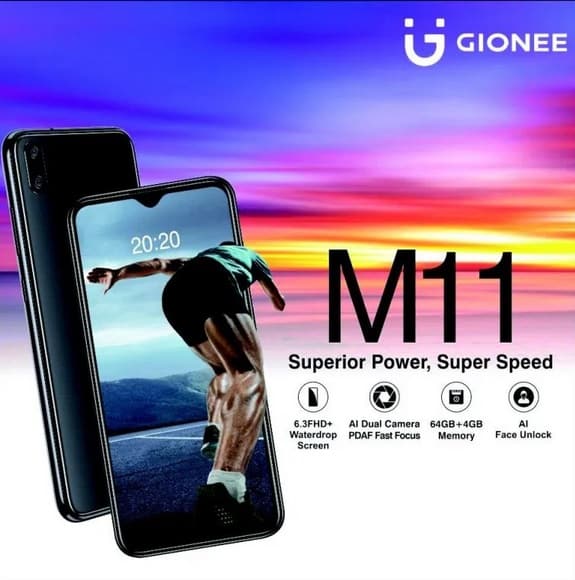 The new Gionee phones were announced in the first week of September 2019 but arrived in Nigeria a few days ago in January 2020. That means that you can now purchase the phone via authorized retailers.

Recall that the Chinese smartphone maker, Gionee went bankrupt in 2018, which is due to unpaid debts and reportedly poor financial management.

Well, the company made a comeback a couple of months ago with the launch of two smartphones, which happens to be the Gionee M11, Gionee M11 PRO, and the Gionee M11s.

Although the new mobile phone series stopped at the Gionee M7 Power, that is the M-series. But the new phone series might be able to revolutionalize the company’s aim to the phone industry.

The Gionee M11 will be available in Gradient Purple, Gradient Blue, and Black colors. Gionee M11S will make its way in Dream Blue, Ink Green and Starry Black colours.

You can find a dual rear camera setup, which includes the main 16-megapixels primary camera paired with a 2-megapixels secondary sensor, which can be interpolated to 5MP.

While the water-drop notch display hosts a single 13-megapixel selfie sensor, which can be used for both “selfie and video beauty”, as the company said.

Since it is not a flagship or high mid-range phone, the mobile device only arrived with AI face unlock and a physical rear-mounted fingerprint sensor.

Under the hood, the phone is completely powered by an Octa-core 2.0GHz octa-core processor, coupled with 4GB RAM + 64GB storage, but expandable up to 128GB via microSD card slot. Offering more storage and high performance.

It runs on a traditional Android 8.1 Oreo out of the box and it is powered by a 5,000mAh battery capacity, that can be powered via a Type C cable. It is currently priced at N64,000 in Nigeria’s online markets.