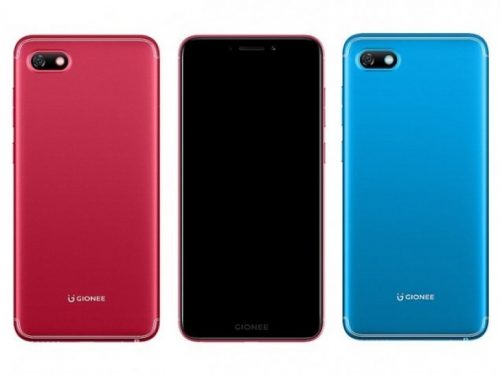 The Chinese company launched the Gionee F205 alongside with the Gionee S11 Lite. They looks attractive and beautiful, they both come with similar such as Face Unlock, FullView 18:9 aspect ratio but the S11 Lite is slightly costlier than the F205.

On the appearance, you will immediately noticed that the phone didn’t come with fingerprint sensor, which is traditionally mounted at the back (rear) place, anyways, its absence might be duly noticed due to the Face Unlock feature but the fingerprint sensor scanner is surely the most acceptable security in modernized phones.

Definitely, it is an entry-Smartphone with FullView display. The phone was unveiled by Marketing Manager, Nicholas Zhou. The F205 looks cool and yep, it gives you desirable specs, feature and a complete value for your money.

According to David Chang, Global Sales Director, Gionee India, the second-tier Chinese handset maker is geared up for a big splash in India with new smartphone launches amid a revamped strategy to be among the top five players in the country.

Like other 18:9 aspect ratio, the phone skipped the physical buttons and exchanged with on-screen Home, Back, and Overview navigation buttons. To keep the phone in a considerable price, it comes with low 5-megapixels sensor but still features bokeh effects.

Connectivity includes some basic specs like 4G VoLTE and Bluetooth 4.2. The device is powered by MediaTek 6739 chipset with four Cortex-A53 CPU running cores at 1.3 GHz. Gionee also promises other features such as like App Clone, and Private Space 2.0. It looks more affordable, gorgeous and good-looking from afar.