The Gionee F205 Pro is the direct successor to the Gionee F205 Android Smartphone, but the specs and features aren’t much bigger from each other. 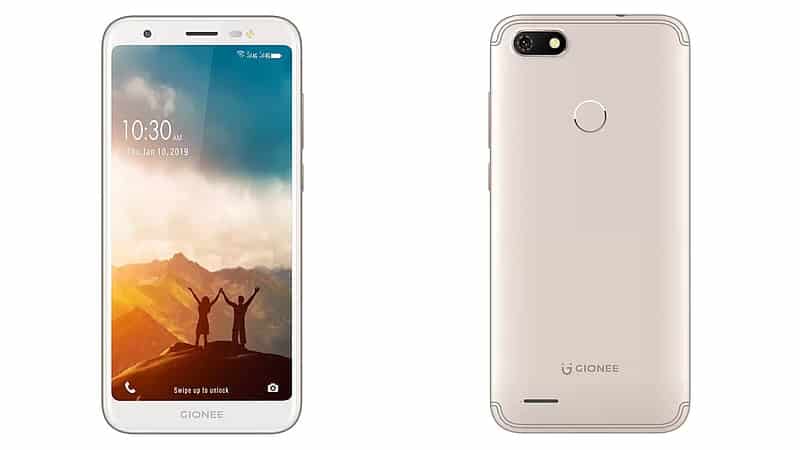 The Gionee F205 Pro is just another curvy Android Smartphone, with moderate screen size, fingerprint sensor mounted at the back, with big bezels.

It comes in different Black, Blue, and Champagne gold colour variants. And you can find the fingerprint sensor scanner, and a single camera lens at the back and front.

For the optics, Gionee F205 Pro Smartphone arrives with a single camera sensor at the front for selfie, and another at the back for optimal shots.

At the front of the Gionee F205 Pro, you’ll find a 5-megapixel front camera, with an f/2.2 aperture. This is for taking amazing selfies. Doubles as Face Unlock feature.

While for the back of the phone consists of a single 13-megapixel rear camera with an f/2.0 aperture. Which is enhanced with features such as Portrait Mode, beautification, HDR, scene detection, and more.

The Gionee F205 Pro is powered by a 1.5GHz quad-core MediaTek MT6739WW SoC processor, which is best for boasting the performance of a entry-level smartphone mobile handset.

Arrives in just one single variant, 2GB of RAM for bringing fast switching of apps, and enhancing multitasking level. Alongside with a 16GB of internal storage.

Thankfully, the Gionee F205 Pro internal storage is expandable up to 256GB via a dedicated microSD card slot. This will allow you to save more files.

The Gionee F205 Pro runs a custom interface based on Android 8.1 Oreo OS, which is not the latest Android OS but it is expected for a entry-level smartphone Smartphone.

For the power house, the Gionee F205 Pro is totally fueled by a 3,000mAh battery capacity, under the hood. Which will last for some few hours, touted by the company.