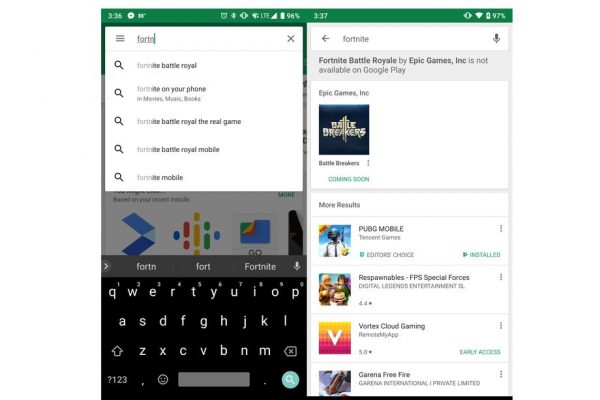 Fortnite Battle Royale is one of the best games right now! It might be available to iPhone users, but Android fanboys take a stroll from Google playstore, it is not yet available on Google Platform.

Are you enthusiastic to play the most interesting game in 2018, and you own a mobile phone but powered by Android? Google is directly warning all its users that the game is not available in their playstore.

The warning is much like a warning to users, so that they will avoid downloading and installing the clone app from its store. You might want to try it out, search Fortnite Battle Royale on Google playstore and you will receive this message:

“Fortnite Battle Royale by Epic Games, Inc is not available on Google Play”

At first, Google made a mistake on the games name at first, calling Royale, Royal: but it has been since corrected. The game was first available to Samsung Galaxy Note 9, but Epic are planning on making the game available later on mobile phones that can handle high graphic games.

Epic Games requires users who want to run Fortnite on Android to download an APK of the beta directly from its site.