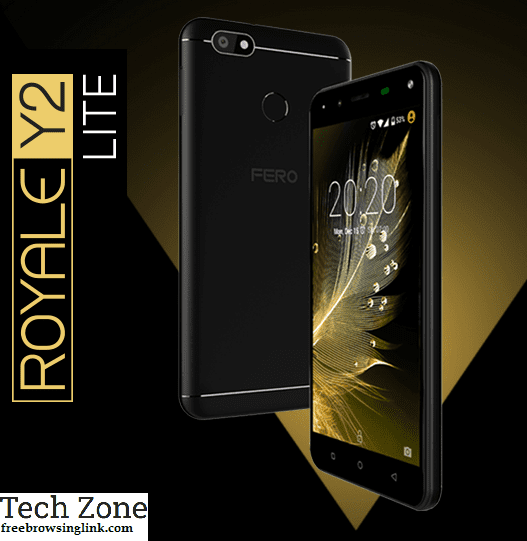 Fero Royale Y2 Lite is a Smart device with 3900mAh battery capacity, classic and elegant design with a fine cutting-edge design frame and the company’s signature is written all over the phone.

The antenna on the top and bottom back of phone is quite noticeable, hosting a rear-mounted fingerprint sensor scanner, and the company’s logo sits under the biometric sensor. The phone is available in Champagne Gold and Black color options.

The Royale Y2 Lite is the 3G version of the standard Royale Y2 Android Smartphone with 4G. The phone looks as brilliant as the main Smartphone, the specification and features are the same. There is one major similarities between the both phone.

The Fero Royale Y2 Smartphone comes with 4G LTE as its fastest network and connectivity, alongside with other network such as 2G, 3G, WiFi, Bluetooth v4.1, microUSB port, 3.5mm audio jack, OTG support.

But the Fero Royale Y2 Lite is a 3G mobile device. Every other specs remains the same, 2GB RAM, 16GB of internal storage expandable up to 128GB via micro SD card slot. Runs on Android 7.0 Nougat.

Front and back 13-megapixels camera sensors with Auto-focus support. There is 3.5mm audio jack, powered by a 1.25 GHz, Quad Core Processor and brings in the same 5.5 inch HD TFT screen display.

It is easier to say that the Royale Y2 is the 4G LTE version while the Royale Y2 Lite is the 3G version of the series. Infinix has also done this on their Note 3 and Note 3 Pro. Henceforth, if you so much like 4G mobile phones, then the Y2 Lite isn’t meant for you. The price is N35,000 and available on both online and offline markets.