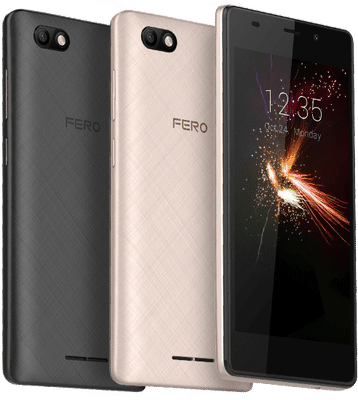 The Fero Royale A1 is among the company’s first Smartphone to feature in the Royale series. The phone comes with a pure shiny design on the front and back, with the 145.5 x 71 x 9.4mm dimension, it sport a sleek and slim textured material.

The Fero Royale A1 is among the best and latest Fero mobile phones to come with a fine cutting edge design, it packs a single camera lens on the front and back, but it doesn’t come with a Fingerprint sensor.

The Fero Royale A1 is deemed the best Smartphone to feature 1GB of RAM, coupled with 8GB of internal storage for storing multiple documents, such as apps, music, movies, photos and many more, and it can be expanded up to 32GB via micro SD card slot.

The Fero Royale A1 Smartphone is powered by a MediaTek MTK6580 chipset running at 1.3 GHz, Quad Core processor, this allows for a smooth processor performance and the phone runs on a dedicated Android 6.0 Marshmallow.

Everything on the phone is fueled by a massive 5000mAh battery capacity and the Fero Royale A1 price is around N25k – N30k, which is currently available in both online and offline stores.