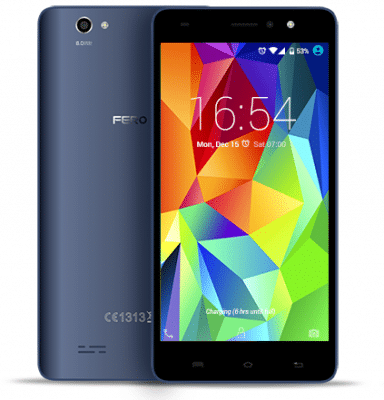 Fero Mega LTE Android Smartphone is the soup-up variant of the Fero Mega device. Like the name, it comes with LTE network for faster browsing and downloading of files at a higher uplink.

The Fero Mega LTE is only available in Blue color, which is fascinating to hear about. As it will fit your fashion sense and bring out that impressive shiny and elegant look.

At front camera, it holds a 5-megapixels with soft flash, while at the back, it comes with 8-megapixels autofocus camera with LED flash. Connectivity options includes GPS, WiFi, Bluetooth v4.0, USB: microUSB v2.0, USB OTG. The
4G LTE network band is the phone most competitive features.

Features a 2GB of RAM, for multitasking, 16GB internal storage, which is expandable via MICRO SD up to 32GB. And fueled by a removable 2800mAh battery capacity. But it is quite expensive, it is priced at N42,000 in Nigeria market and it is available for purchase, if you are interested!