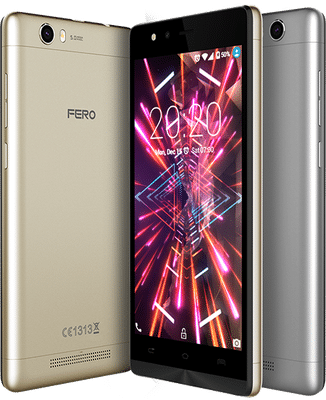 The Fero L100 is an Android powered device with an impressive metallic design, the device comes with a wide 5’inches screen display, this offers a more wider view of what you are watching. There is the clean and smooth finishing design on front and back.

The Fero L100 is a smooth and attractive device, it can also be used as a backup device for extra-ordinary users. The phone is much like other low-end devices, running on Android 6.0 Marshmallow.

And it is powered by a SC9832 chipset, which is mostly seen on Partner mobile phones, and it runs at 1.3 Ghz Quad core processor, coupled with the 1GB of RAM, you can possibly enjoy more amazing and intensive games, open various apps at once and many more

To store your large amount of files, such as photos, videos, games, applications and many more, there is the 8GB of internal storage, and it is not enough, you can expand it upto 32GB using a micro sd card. Everything on the device is fueled by the removable 2350mAh Li-ON battery capacity.

There is 5-megapixels on the front and back, support 4G LTE, Dual SIM, WiFi dual band, and it weighs just 137grams. The Fero L100 is priced around N20k – N25k in Nigeria currency, and can be purchased at any leading stores across the globe.