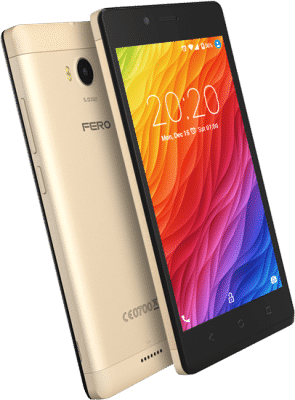 Fero A5002 Android powered Smartphone arrives with a unique stylish design, but it is a low-end device with 1GB RAM, 8GB internal storage and runs on Android Marshmallow with a powerful 1.3GHz Quad-Core Processor to make the most of everything.

The company, Fero Aura series is specially made with interesting, and durable panel that provide that peculiar feeling, impressive moderate large screen that holds a sharp display and a bottom in-screen navigation buttons.

Clearly, the Fero A5000 and Fero A5002 comes with few similar specs and huge difference. However, there is the same 5’inche FWVGA display, which is protected by a dragontrail glass for scratch-less usage, and shows sharp display at 480 × 854 pixels.

One of the difference is the weight and dimension, the A5002 weighs 137grams than the A5000 at 130 grams. There is no fingerprint sensor scanner, but features the same single camera at the front and back with different pixels.

Packs identical 1GB RAM, 8GB in-built memory expandable up to 32GB via micro SD card slot. But the processor, battery capacity and OS is different, the Fero A5002 is powered by a slow and less powerful SC7731C chipset clocked at 1.3 GHz, Quad Core processor and runs on Android 6.0 Marshmallow OS with removable 2500mAh Li-Ion battery capacity.

While the Fero A5000 arrives with MediaTek MT8321 chipset clocked at at 1.3Ghz Quad-core, A7 processor and runs on Android 7.0 Nougat OS with removable 2300mAh Li-Poly battery capacity, both batteries are not attractive and doesn’t pose as a threat to the power Smartphone markets.

Anyways, Fero mobile is asking for N20,400 for a unit of the Fero A5002, and it is available for purchase in various authorized offline and online stores scattered nationwide and outside the country.