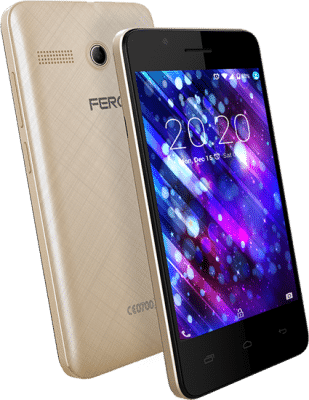 Fero A4001 Plus screen display is massively smaller but comfortable, when holding in your hands. The Smartphone runs on Android 6.0 marshmallow operating system coupled with 512 RAM for seamless multitasking.

The Fero A4001 Plus is among the company Aura series, and it is light-weighted. Unfortunately, it comes with a smaller screen display, and an impressive textured poly-carbonate based back panel, with premium feeling. Available in Gold, Space Grey color options.

For the camera aspect, it is nothing to write home about, the front selfie snapper is a VGA while the back camera lens holds a 2-megapixels with LED flash. Comes with 2G, 3G, WiFi, Bluetooth v4.0, microUSB 2.0, 3.5mm audio port and loudspeaker grill.

Sports a 512MB RAM, 8GB of internal storage, which is expandable up to 32GB via micro SD card slot. It runs on Android OS, v6.0 (Marshmallow), powered by a SC7731C chipset running at 1.2 GHz, Quad Core Processor and fueled by a 2500mAh battery capacity.

The Fero A4001 Plus is priced at N14,000 and it is currently available in all the authorized offline and online stores, in Nigeria, that are permitted to ship out Fero mobile phones to all states.