Facebook’s new meme-making app is called Whale, and it is the company’s latest experiment. Whale app allows users to design their photos with text and stickers to create memes.

At the end of the editing the photos with text and stickers, users can either share the meme on social media platforms such as Instagram and Messenger or can also be texted to friends.

Facebook’s list of experimental apps includes Moments, Notify, Lifestage, Poke, Slingshot, Tbh, Moves, and Hello. While 4 out of this 8 apps has shut down, don’t get too attached to Whale app, its just an experimental app!

Since, Facebook quietly announced the Whale app, it is only available on Canadian App Store right now. It is free to use without in-app purchases or subscriptions.

Facebook’s NPE Team, is a new division team that was earlier setup in July, to develop new experimental apps for the social media giant. They are responsible for developing Bump and Aux, and now Whale, contributing to its third app lineup.

A Facebook spokesperson told The Information, who spotted that Apptopia, App store intelligence firm was first to spot Whale’s launch “that the apps are intended to help the company discover new features and services that people like” 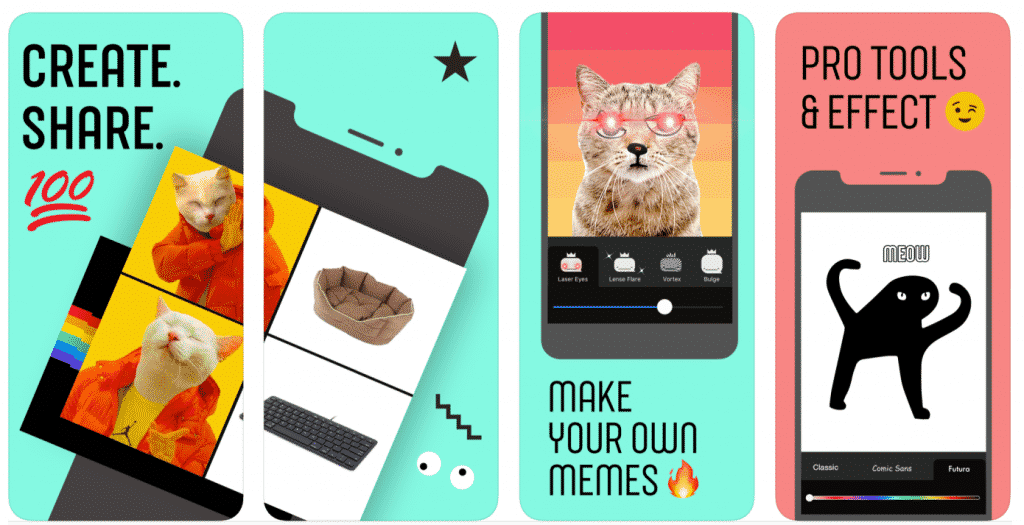 Whale app works in a more convenient way, where users takes a photo, either your own photos from camera roll or images from the app’s library of stock photos and then create a meme.

It supports Blank, 2-grid, 3-grid, and 4-grid canvas layouts. Users can easily and quickly add some decorative customization to the images, such as emojis, text, effects, and filters like laser eyes, vortex or bulge.

TikTok-owner ByteDance’s links to Beijing is currently under investigation from US lawmakers, all thanks to Facebook’s Mark Zuckerberg who recently raised concerns over the app’s censorship of criticism of the Chinese government.

Facebook bringing the Whale app at this time is swift, and TikTok growth is getting slower, after adding more than 500 million users, which will soon reach 1.5 billion users in total.

To make the memes more attractive, users can make their own image stickers using the crop and cut tools. And those with artistic capabilities can use the included freeform drawing tool, as well.