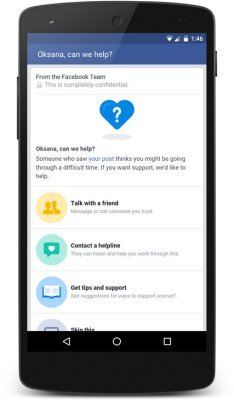 Facebook are really in the realm of updating their online web portal including their Messenger application. And now, they have also launch other inspiring update which has been confirmed by Facebook.

It is now official. Facebook successfully launched a tool for suicide prevention. Are you afraid that a Friend wants to commit suicide then report him or her because Facebook now Offers Tools for Those Who Fear a Friend May Be Suicidal. Let’s get to know a little about the Facebook Suicide application.

Facebook are rolling out a tool to help people to flag posts that they think could be related to a potential suicide. So today, if you see any of your friends online on Facebook, updating his/her status like Suicide status then don’t wait now, just go and report him/her.

So, If you’ve encountered a direct threat of suicide on Facebook, please contact law enforcement or a suicide hotline immediately.

A Facebook product manager said this on the publication:-

“People really want to help, but often they just don’t know what to say, what to do or how to help their friends, Given that Facebook is the pace you’re connected to friends and family, it seemed like a natural fit”

At first, this tool was available to some English-speaking users but will now roll out globally. Facebook says it has a team to monitor flagged posts 24 hours a day, seven days a week. Facebook’s researchers found that posts with negative associations typically received long, empathetic comments – so it wouldn’t be surprising for this to surface more for feeds of friends who regularly communicate with the original poster.  New York Times

The  Facebook tool works much like a regular button that lets you report posts, but you can choose to let Facebook reach out to that friend and offer a helpline or supporting materials to guide them through their difficult time.